As of September 30, 2021, the breakdown of publicly-traded, cannabis-linked securities was as follows: 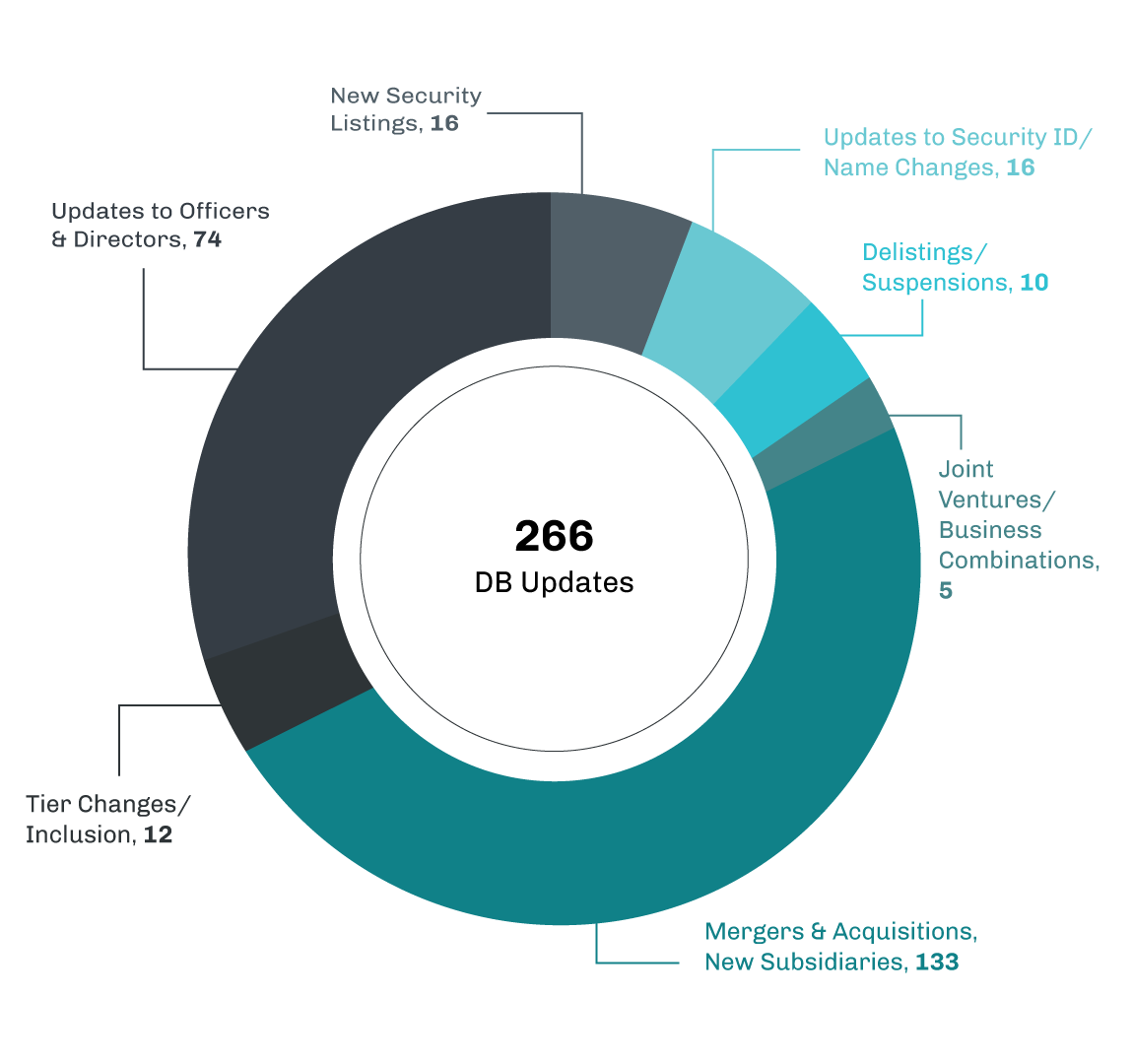 There was no slowing down of the cannabis news cycle during the third quarter of 2021 with regard to mergers and acquisition activity.  Federal and state-level regulatory news continued to flow as well. The following is a sampling of highlights, with links to the articles, from the cannabis-linked security news cycle, as tracked by CRB Monitor throughout the period.  Included are CRB Monitor’s proprietary Risk Tiers.

In mid-July, Senate Majority Leader Chuck Schumer (D–NY), Senate Finance Committee Chairman Ron Wyden (D-OR), and Senator Cory Booker (D-NJ) released a draft version of a bill that would effectively and permanently legalize marijuana in the United States. The bill, officially named the Cannabis Administration and Opportunity Act, is a comprehensive piece of legislation that, if passed, would pave the way for the future of the cannabis industry while providing benefits to underserved communities as well. Quoting from the 30-page summary document:

“Today, more than 90 percent of Americans believe cannabis should be legal either for adult or medical use. Despite legalization under state law and broad public support for cannabis legalization, cannabis remains illegal under federal law. By ending the failed federal prohibition of cannabis, the Cannabis Administration and Opportunity Act will ensure that Americans – especially Black and Brown Americans – no longer have to fear arrest or be barred from public housing or federal financial aid for higher education for using cannabis in states where it’s legal.”

In August, a group of activists in Missouri filed for 2022 ballot initiatives that would make it legal for adults 21 and over to purchase, possess and cultivate cannabis for personal use. A “yes” vote on this initiative would represent a significant move toward full legalization, given that Missouri has been slow to legalize marijuana for medical use, which recently went into effect in 2019 with Amendment 2, called the Medical Marijuana and Veteran Healthcare Services Initiative.  According to a recent report by Thompson Coburn:

“Prior to 2019, only hemp-extract products were legal in Missouri, and only for those who suffer from epilepsy. The law authorizing such products, “Hemp Extract for Treatment of Intractable Epilepsy”, was passed by legislature and signed into law in 2014. The Missouri Department of Agriculture manages hemp extract cultivation and production. Amendment 2 specifically exempted industrial hemp from its purview.”

Then in September in Mississippi (one of a handful of states that has yet to legalize medical cannabis), Governor Tate Reeves (R) slowed the progress on a medical cannabis legalization bill, stating concerns about funding for cannabis-related programs. The draft version of the bill would levy the state’s sales tax, currently at 7 percent, on marijuana, and a $15 per ounce excise. But the bill, about which Reeves has stated his concerns, does not specify funding for the Departments of Health, Revenue, and Agriculture to run and regulate it. Rather, the bill routes the marijuana revenue into the general fund. This has prompted concern from state health and agriculture leaders that lawmakers would not adequately fund the agencies to stand up such a program.

As always, we continue to monitor the cannabis space as cannabis companies respond to impact from significant ongoing forces - new legalization/decriminalization measures emerging at the state level; the economic and financial impact brought about by the COVID-19 pandemic; and, perhaps the most interesting, are the latest developments coming out of the US Federal Government.

Cannabis-linked equities continued their downward trend throughout the third quarter of 2021, giving back essentially all of the staggering returns investors enjoyed in Q1 and then some. An equally-weighted basket of the 13 pure play CRBs with market capitalization over $1 billion returned -23.5% for Q3 and is now down 3.9% year-to-date through September 30, 2021. CRBs struggled across the board, and we were hard-pressed to find any silver linings in Q3 with few, if any, highlights.

Tier 1B Green Thumb Industries Inc. (CSE: GTII) was one of the better performing CRBs, closing out the quarter down 15.4%, making it the second best performing stock in the over-$1b-market cap basket. GTII expanded its US cannabis “thumb” print in July with the closing of its acquisition of Virginia grower/processer/retailer Dharma Pharmaceuticals. This purchase broadened GTII’s presence in the US to 14 states and increased its subsidiaries’ total number of active cannabis licenses to 188. The best performing CRB in the basket was Tier 1B Ayr Wellness Inc. (CSE: AYR.A), which finished the quarter down 5.2%. Ayr Wellness, a Canada-based, vertically-integrated, US multi-state operator (MSO), holds 47 active cannabis licenses (through its subsidiaries) for medical and recreational use, covering essentially every phase from cannabis cultivation to retailing. According to their latest investor presentation, Ayr is “on track to be the largest scale producer of high-quality cannabis in the US.”

On the other end of the return spectrum was Tier 1A CRB Canopy Growth Corporation (TSX: WEED), the number two pure play CRB by market cap, which fell by 41.5% in Q3 2021 in what appeared to be a swan dive that started in early February and had not stopped by the end of September. WEED has now fallen 73% from its high in early February, when CEO David Klein announced better-than-expected quarterly earnings numbers. We will be watching Canopy Growth in the coming months to see when it appears safe for investors to start buying again. Another cannabis industry leader which has been in a similar tailspin is Tilray, Inc. (Nasdaq: TLRY), which was down 37% in Q3 and down a breathtaking 82.6% from its high in early February. All this is in spite of the fact that TLRY’s reported earnings were up for the 10th consecutive period and revenues spiked by 43% YoY in Q1. Nearly as disappointing for investors was the performance of Verano Holdings Corp. (CSE: VRNO), which fell by more than 29% in Q3 2021. In July, Verano announced the opening of its 80th dispensary in the US, located in Pittsburgh and featuring Pennsylvania’s first drive-through service. Per the CRB Monitor database, this brings Verano’s active and pending license count to 130 across 18 states in the US (as of September 30). 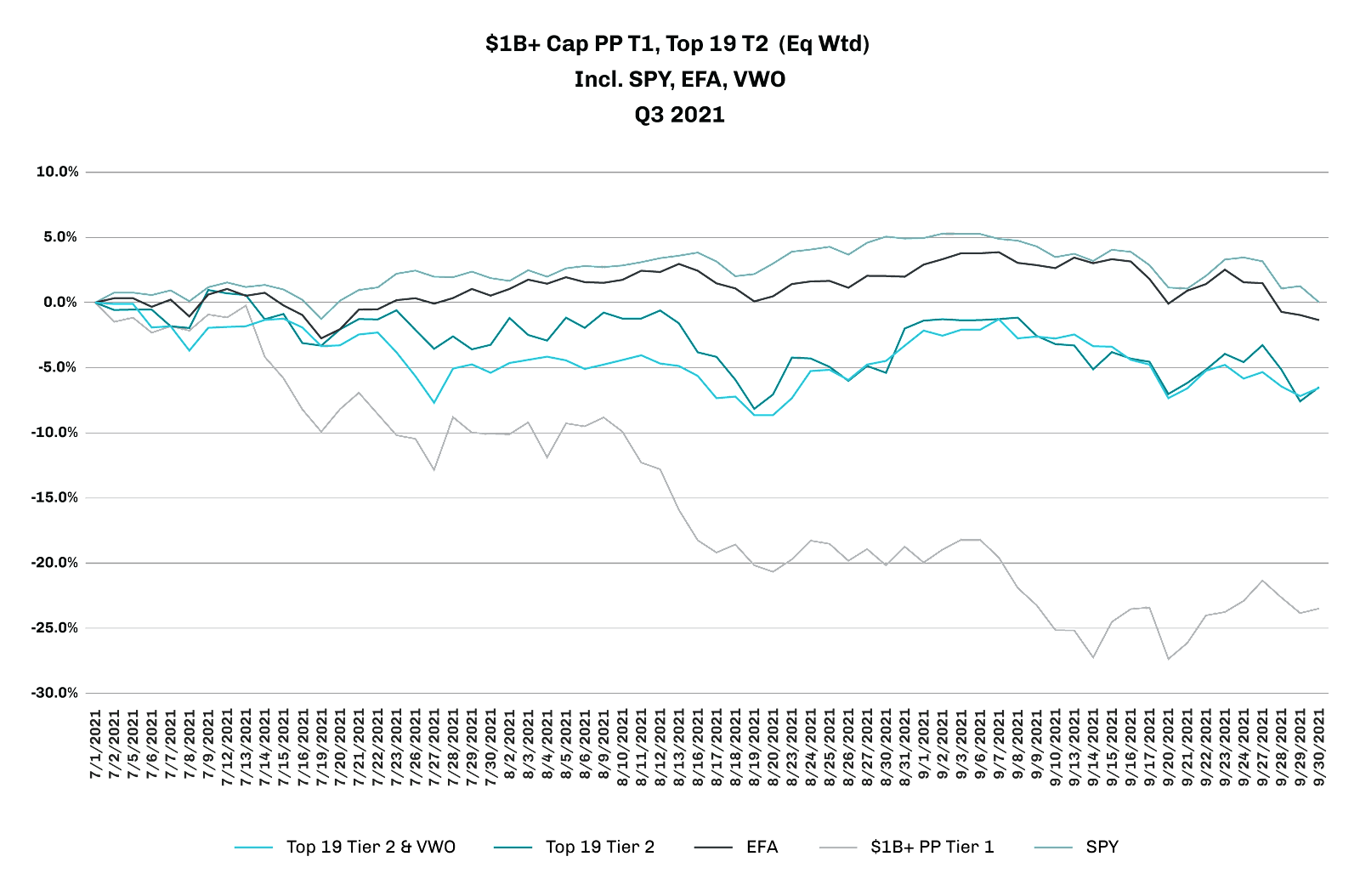