In 2021, CRB Monitor’s research team made more than 1,100 updates to securities’ information and added more than 5,000 source documents and relevant news articles to the CRB Monitor database.  Here is a summary of the updates for July 2021:

The cannabis M&A train kept rolling in the month of July as CRB Monitor research identified mergers and acquisitions that resulted in 48 new subsidiary relationships for publicly-traded CRBs.

Tier 1B CRB Green Thumb Industries Inc. (CSE: GTII) expanded its US cannabis “thumb” print in July by establishing operations in Virginia with the closing of its acquisition of grower/processor/retailer Dharma Pharmaceuticals.  This purchase broadens GTII’s presence in the US to 14 states and increases its subsidiaries’ total number of active cannabis licenses to 188.

Kiaro Holdings Corp. (TSXV: KO), a Tier 1B Canadian CRB added 7 newly-licensed Tier 1A retail locations in Ontario while securing an opening into distribution in Australia.  Now operating in British Columbia, Ontario, and Saskatchewan, these acquisitions bring Kiaro’s active license total (all recreational cannabis) to 23.  What’s also interesting about this transaction is that it includes the creation of “a new digital portfolio focused on the supply of high-quality consumption accessories to Canadian, American and Australian consumers,” according to a July press release.

In July, top 20 Tier 1A Sundial Growers Inc. (NASDAQ: SNDL), completed its acquisition of all the issued and outstanding shares of Spirit Leaf Retail Cannabis Network, aka Inner Spirit Holdings Ltd.  This was a significant move for Sundial, which broadened and deepened its product set as well as diversified its presence, particularly in Canada.  This acquisition expanded Sundial’s presence by 88 medical and retail licenses across 5 provinces and, in the words of Sundial’s PR department “establishes Sundial as one of Canada's largest vertically integrated cannabis companies.”

And we’d be remiss if we failed to mention the latest news regarding Tier 1B Verano Holdings Corp. (CSE: VRNO).  In a continuation of the growth of its footprint in the medical and recreational cannabis market, Verano announced the opening of its 80th dispensary in the US, located in Pittsburgh and featuring Pennsylvania’s first drive-through service.  Per the CRB Monitor database, this brings Verano’s active and pending license count to 130 across 18 states in the US.

In mid-July 2021, Senate Majority Leader Chuck Schumer (D–NY), Senate Finance Committee Chairman Ron Wyden, (D-OR) and Senator Cory Booker (D-NJ) released a draft version of a bill that would effectively and permanently legalize marijuana in the United States.  The bill, officially named the Cannabis Administration and Opportunity Act, is a comprehensive piece of legislation that if passed, would pave the way for the future of the cannabis industry while providing benefits to underserved communities as well.  Quoting from the 30-page summary document:

“Today, more than 90 percent of Americans believe cannabis should be legal either for adult or medical use. Despite legalization under state law and broad public support for cannabis legalization, cannabis remains illegal under federal law.  By ending the failed federal prohibition of cannabis, the Cannabis Administration and Opportunity Act will ensure that Americans – especially Black and Brown Americans – no longer have to fear arrest or be barred from public housing or federal financial aid for higher education for using cannabis in states where it’s legal.”

This sweeping bill, if it were to pass and be signed by the President, would:

As we have stated in the past, this legislation faces its share of obstacles.  While the US House of Representatives appears to have the votes to pass a version of this bill, there are barriers to its passage both in the Senate and in the Executive branch, which has been firmly opposed to cannabis legalization since prior to the 2020 election.  As always, stay tuned, as this story is far from over! 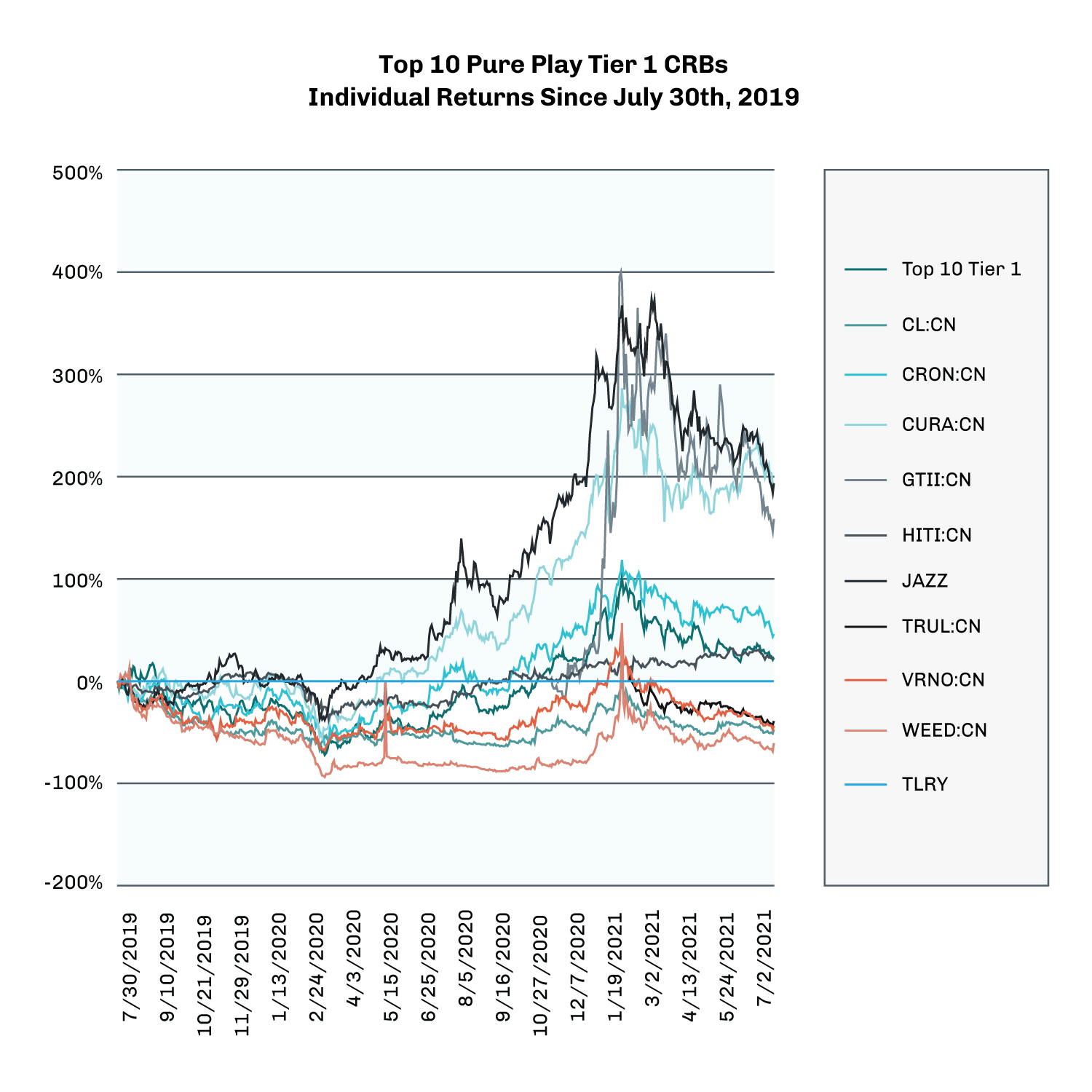 
We can see on the chart above how things have played out for the more significant players over the last 24 months of returns.  It’s reasonable to assume that the larger, household-name CRBs – Tilray, Inc. (Nasdaq: TLRY) (-64%), Cronos Group Inc. (TSX: CRON) (-55%), and Canopy Growth Corporation (TSX: WEED) (-47%) – have done quite a bit of taking with very little giving over this period and investors should take note.  In spite of the February 2021 spike, these three marquis CRBs, with their ambitious corporate strategies, have not delivered value for their shareholders and their performance has proven this out.

Conversely, for investors that chose wisely over the last two years their bets have paid off.  Risk notwithstanding, High Tide Inc. (CSE: HITI) (+173%), Trulieve Cannabis Corp. (CSE: TRUL) (+195%), and Green Thumb Industries Inc. (CSE: GTII ) (+194%) have rewarded investors by implementing successful growth-driven strategies, particularly with expansion of operations throughout the United States.  We should note that these three CRBs are companies with their primary listings on the CSE, and they all have a direct connection to the production and sale of US marijuana.  Meanwhile, TLRY, CRON, and WEED have intentionally conducted their direct marijuana operations outside of the US, which has allowed them to list on TSX and Nasdaq.  It would appear that this strategy has been a disappointment over the last 2 years for their shareholders.

[One final note on longer term performance: For investors in an equally-weighted, diversified index of the top 10 pure play CRBs, the 2-year performance through July 2021 has been a respectable 51%.]

Cannabis equities tended to underperform mainstream equities in July 2021, in an apparent protracted correction that followed a brief, but significant rally in early February.  Are we seeing the makings of another prolonged selloff, similar to what we witnessed beginning back in April 2019?  This could be the case, given the ongoing regulatory gridlock at the federal level (see news analysis above) and cannabis companies’ apparent inability to deliver consistent profits over an extended period of time.  Or have the larger players (i.e. Tilray) overextended themselves via their blockbuster acquisitions, leaving too little cash on the balance sheet to weather another wave of the pandemic and subsequent economic turndown?  Once again, stay tuned for future developments.

The CRB Monitor index of Top 10 pure play CRBs (equally weighted) had a return of -12.1% for July 2021, with all 10 constituents in negative territory for the month.  The Top 10 index underperformed major domestic and global indexes (SPX, EAFE, and EMF) for July. 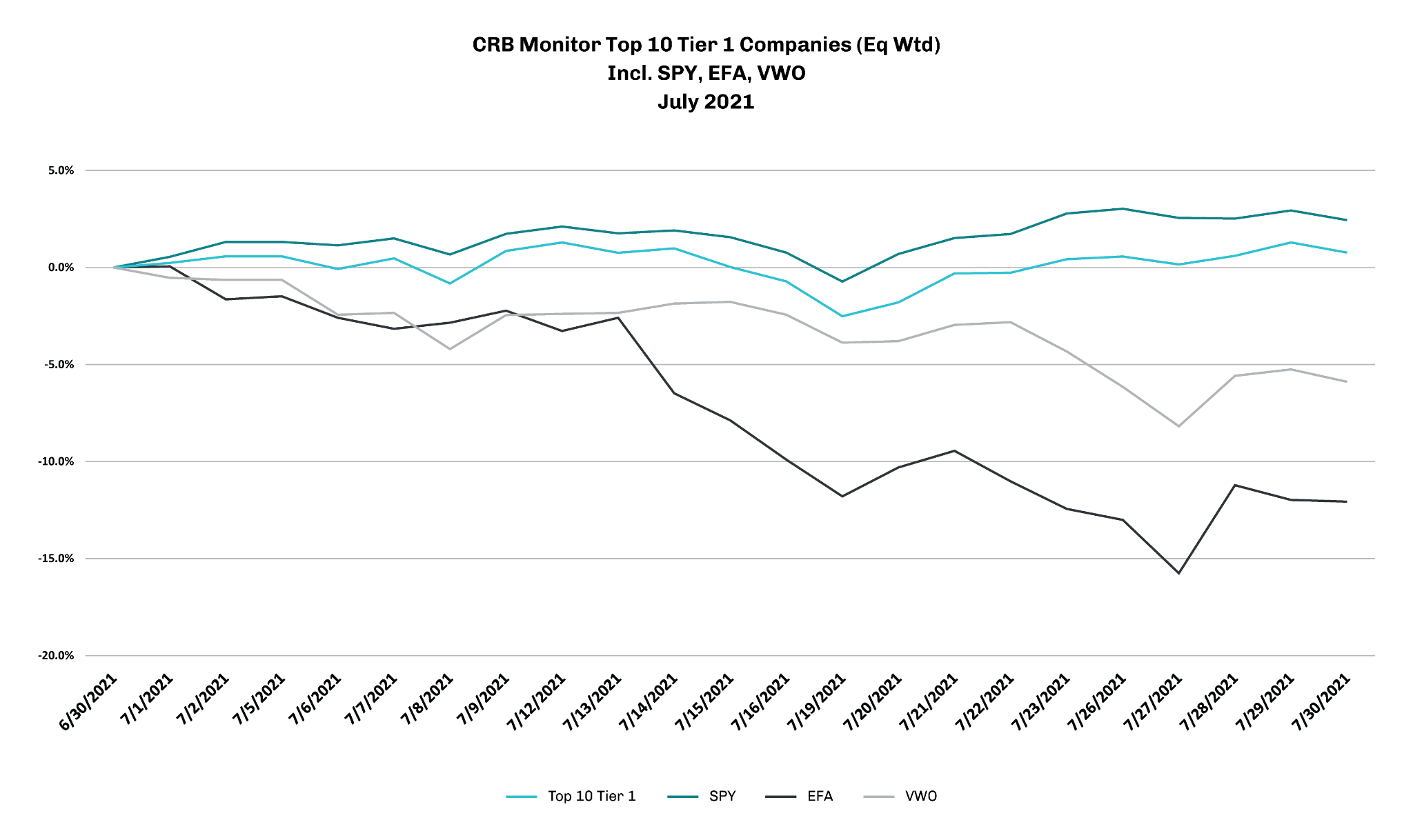 The following is a sampling of highlights from the July 2021 cannabis news cycle, as tracked by CRB Monitor.  Included are CRB Monitor’s proprietary Risk Tiers.