As of March 31, 2021, the breakdown of publicly traded securities was as follows: 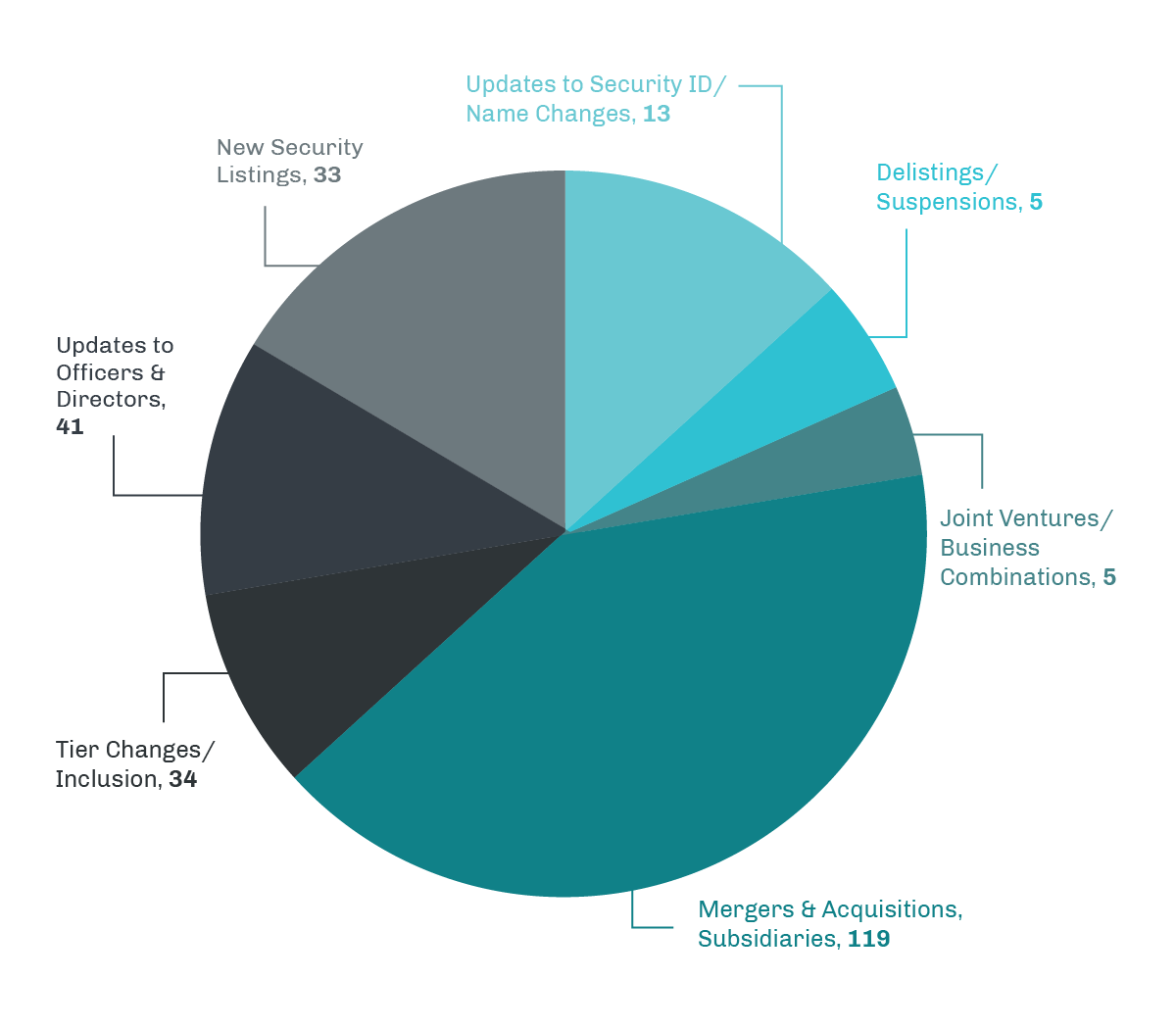 In a continuation of Q4 2020, cannabis-related companies remained active during the first quarter of 2021.  With chatter over November legalization/decriminalization in the rearview mirror, and a newly-expanded list of “legal” states, cannabis investors yearned for the next “hot take”, and the industry did not disappoint.  In January, Tier 1B Cresco Labs Inc. (CSE: CL) announced their acquisition of Florida-based, vertically integrated Tier 1B Bluma Wellness Corp. (CSE: BWEL.U), in a deal worth $213 million.  This news dovetailed with some apparent progress toward the legalization of adult-use cannabis in the state of Florida, with the introduction of a legalization bill in the Florida House of Representatives.  Unfortunately for cannabis consumers and businesses, the passage of this bill might not happen any time soon, as a subsequent ballot initiative that was to be put to the voters in 2022 was unceremoniously blocked in April by the Florida Supreme Court.

Also in January, investors were buzzing over Tier 1A Canopy Growth Corp. (TSX: WEED) announcement of the sale of its large subsidiary, Tier 1B RIV Capital Inc. (TSX: RIV), to RIV’s shareholders in exchange for cash and RIV’s holdings in three CRBs.  Additionally, Tier 1B Tilray, Inc. (Nasdaq: TLRY) announced its reverse takeover of Tier 1A Aphria Inc. (TSX: APHA) in a merger that would make the combined entity the largest pure-play Tier 1 company in the cannabis space, with a market capitalization of over $14 Billion.

In February, investors were treated to the announcement of Jazz Pharmaceuticals’ takeover of Tier 1A CRB GW Pharmaceuticals, in a deal worth $7.2 billion. GW Pharmaceuticals plc (Nasdaq: GWPH), the gold standard for biotech in the medical cannabis industry, is the original manufacturer of Epidiolex, a treatment for epilepsy and the only federally legal, FDA-approved cannabis-derived pharmaceutical product on the market. In this deal, GWPH shareholders will exchange their ADRs for a combination of cash and shares of Tier 1B Jazz Pharmaceuticals (Nasdaq: JAZZ).  As a result, CRB Monitor has included JAZZ as a Tier 1B CRB with GWPH remaining in the database as a Tier 1A public company until the deal is completed.  Once the acquisition is closed, GWPH’s shares will cease trading and the company will remain a private, Tier 1A business in CRB Monitor.

In March, Tier 1B CRB Verano Holdings Corp. (CSE: VRNO), celebrated its new listing on the CSE exchange by making acquisitions of licensed operators in Illinois, Arizona, and Pennsylvania.  Verano’s footprint has been expanding across the US, as the company now owns licensed subsidiaries in eighteen states.

In the first quarter of 2021 investors were reminded that cannabis equities are volatile, a phenomenon that we have gotten used to over the last few years.

Cannabis stocks were lifted early in January by a sharp, positive spike in the performance of Tilray, Inc. (Nasdaq: TLRY), fresh from its announcement of its imminent merger with Tier 1A Aphria Inc. (TSX: APHA).  In January alone, TLRY was up 120% while APHA returned 76%, an indication that the sentiment surrounding this merger was overwhelmingly positive.

There was another driver of performance, however, that hit shares of TLRY in Q1 2021.  Tilray’s performance spiked again, in breathtaking fashion, in early February, by more than 230%.  This return lifted a number of Tier 1 CRBs as well, as they also posted triple-digit returns before crashing back to earth in an apparent short squeeze, not unlike the price behavior of GameStop, just a few weeks earlier.

In March, Tier 1 cannabis-linked equities gave back some of their strong performance from January and February, but the quarter still ended strong.  When the dust settled, the CRB Monitor index of Top 10 Tier 1 CRBs posted a return of over 60% for the first quarter of 2021 significantly outperforming standard domestic and international indexes. 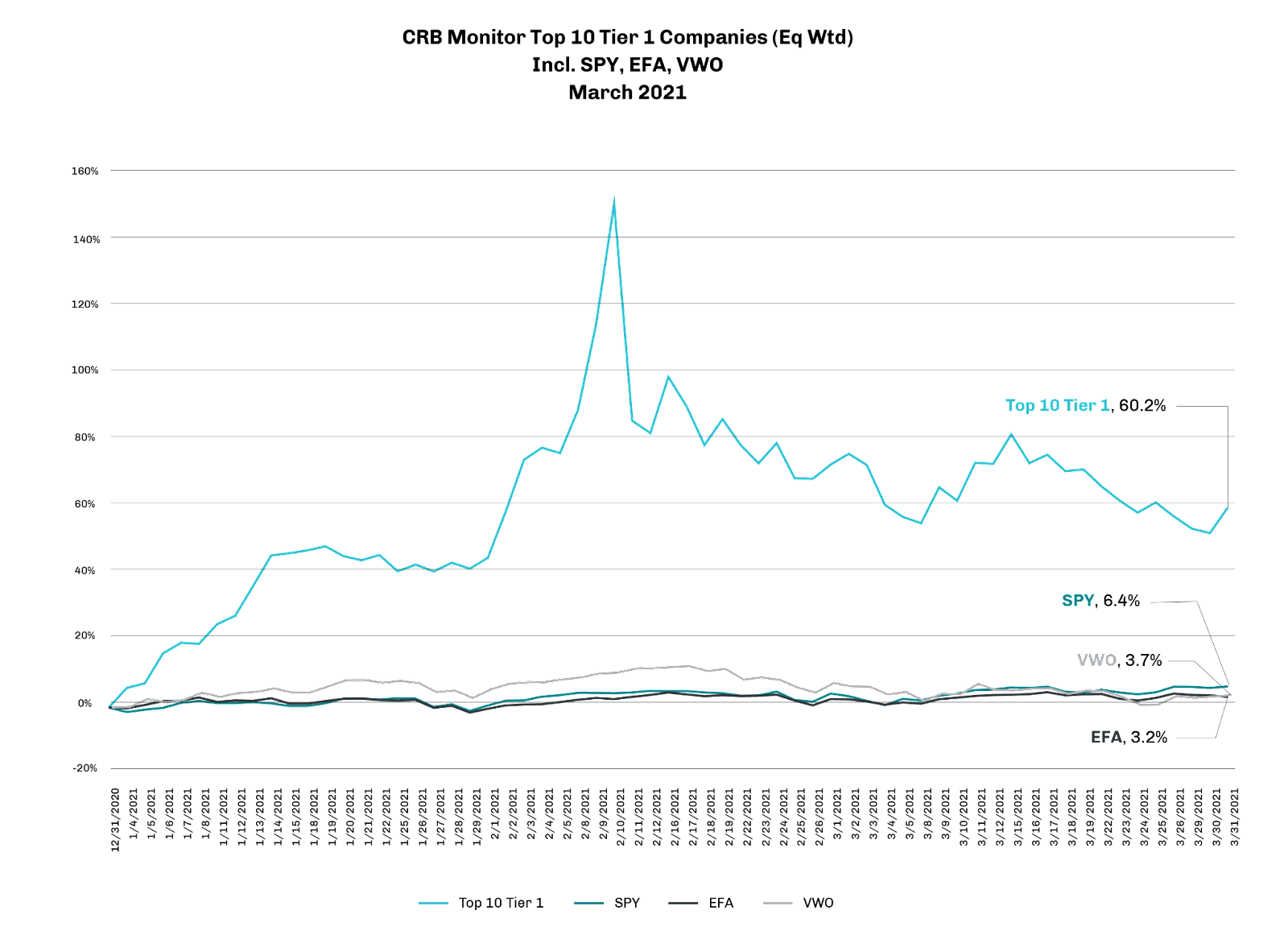