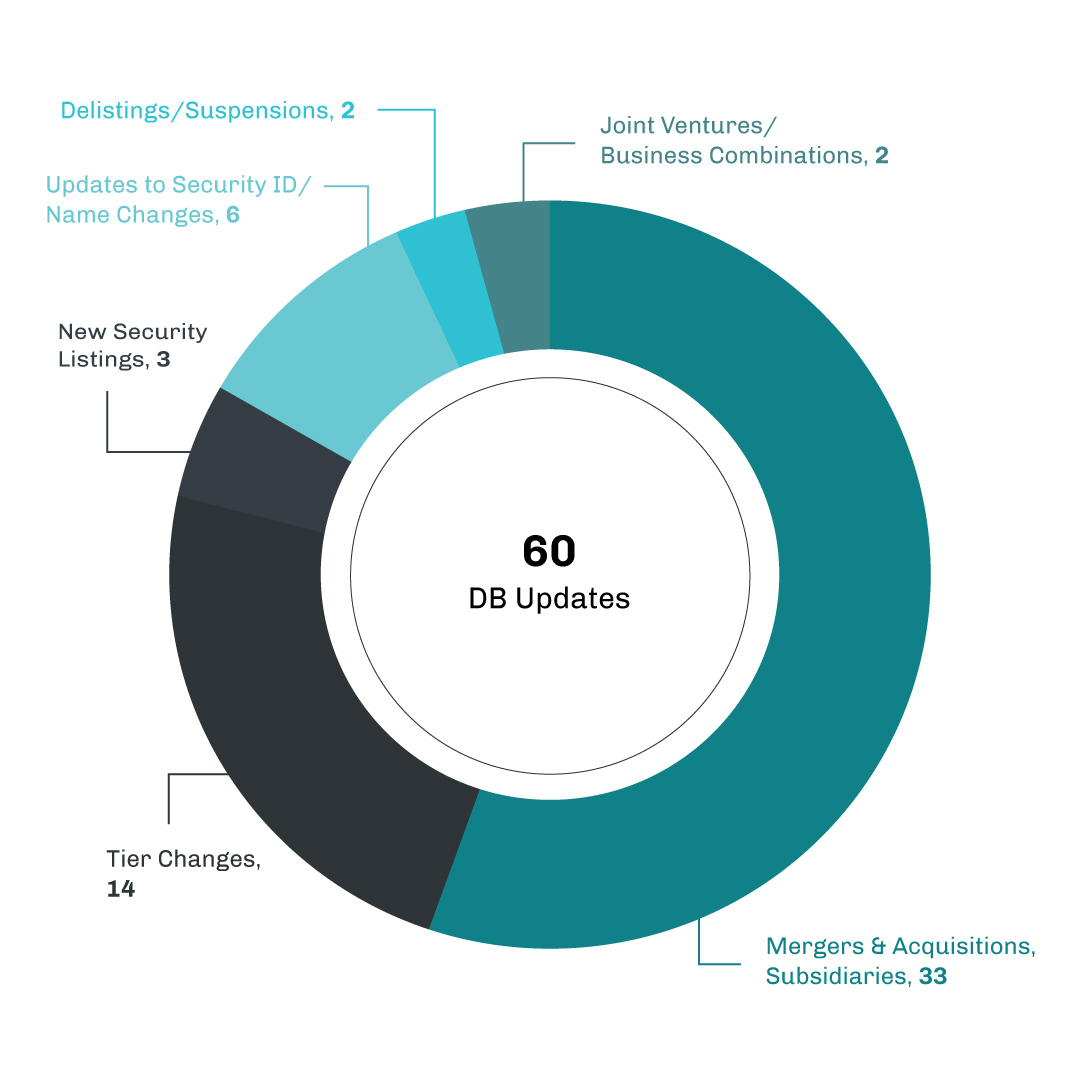 As investors contemplated the implications of the blockbuster merger between Tier 1B CRB Tilray (NAS: TLRY) and Tier 1A CRB Aphria (TSX: APHA), a new, equally compelling M&A deal emerged in the first few weeks of the year.  Tier 1B Cresco Labs Inc. (CSE: CL) announced their acquisition of Florida-based, vertically-integrated Tier 1B CRB Bluma Wellness Corp. (CSE: BWEL.U), in a deal worth $213 million. Our hunch that the TLRY/APHA deal could just be the beginning of a trend is becoming a reality, as the albeit smaller Cresco/Bluma Wellness acquisition is a significant event, as it indicates Cresco’s desire to expand into new states. This move into Florida gives Cresco a 7-state footprint in addition to the Province of Ontario.

Furthermore, in the announcement Cresco’s acquisition of Bluma Wellness anticipates the long-awaited legalization of adult-use cannabis in Florida, a bill for which was introduced in the Florida House of Representatives in January 2021.

Of the thousands of cannabis security news releases and regulatory filings reviewed in January 2021, our research resulted in a total of 391 updates to the CRB Monitor database (60 updates to issuers’ records, 331 news releases added). The complete list of securities and detail for these updates is available to CRB Monitor Securities database clients, but below are highlights.

January was a celebratory month for cannabis investors, as many CRBs resumed their surge that started in the fourth quarter prior to the November elections. Following December’s apparent round of profit-taking, and amid the chaos surrounding the installation of a new administration in Washington, we witnessed another cannabis-linked rally. Canopy Growth (TSX: WEED), the largest CRB by market capitalization, recovered from its recent negative news as investors pushed its price more than 60% higher in the month of January. This dramatic spike in WEED’s stock price followed the announcement by CEO David Klein that he had revised earnings expectations based on his earlier statement that the US cannabis market would open up at the federal level, due to passage of the MORE Act, as early as 2022.

Also in strong recovery mode was Cronos Group (TSX: CRON), a company that has not fared well among its competitors, but given balance sheet support to the tune of $1.8 billion from parent company Altria (NYSE: MO), and perhaps a lift from the sector, investors poured their money into CRON stock, which rebounded in January with a breathtaking 49% return for the month. And we are watching the follow-on effects of the merger between Tier 1B CRB Tilray (NAS: TLRY) and Tier 1A CRB Aphria (TSX: APHA), which evidently had investors scrambling to grab a share of this brass ring: In January alone, TLRY was up 120% while APHA returned 76%, an indication that the sentiment surrounding this merger was overwhelmingly positive.

GW Pharmaceuticals (Nasdaq: GWPH) rebounded in January as well, having returned a negative 17% in December and prior to the early February of its takeover by Jazz Pharmaceuticals plc (Nasdaq: JAZZ). With the assumption that the market did know about the M&A deal, GW Pharma’s unaudited financials projected better-than expected 4th Quarter 2020 earnings, and analysts were generally bullish on the company’s near-term strategy. With that said, GWPH stock posted a 32% return for January 2021.

Following its stunning 161% return in 2020, Trulieve Cannabis Corp. (CSE: TRUL) continued to impress in January, posting a 26% return as they enlarged their dispensary footprint in Florida with grand openings in Gainesville, Sebastian, and Summerfield, bringing their total to 73. Analysts are not cooling their jets over Trulieve’s earnings, which are projected to grow significantly in 2021, per Yahoo Finance. 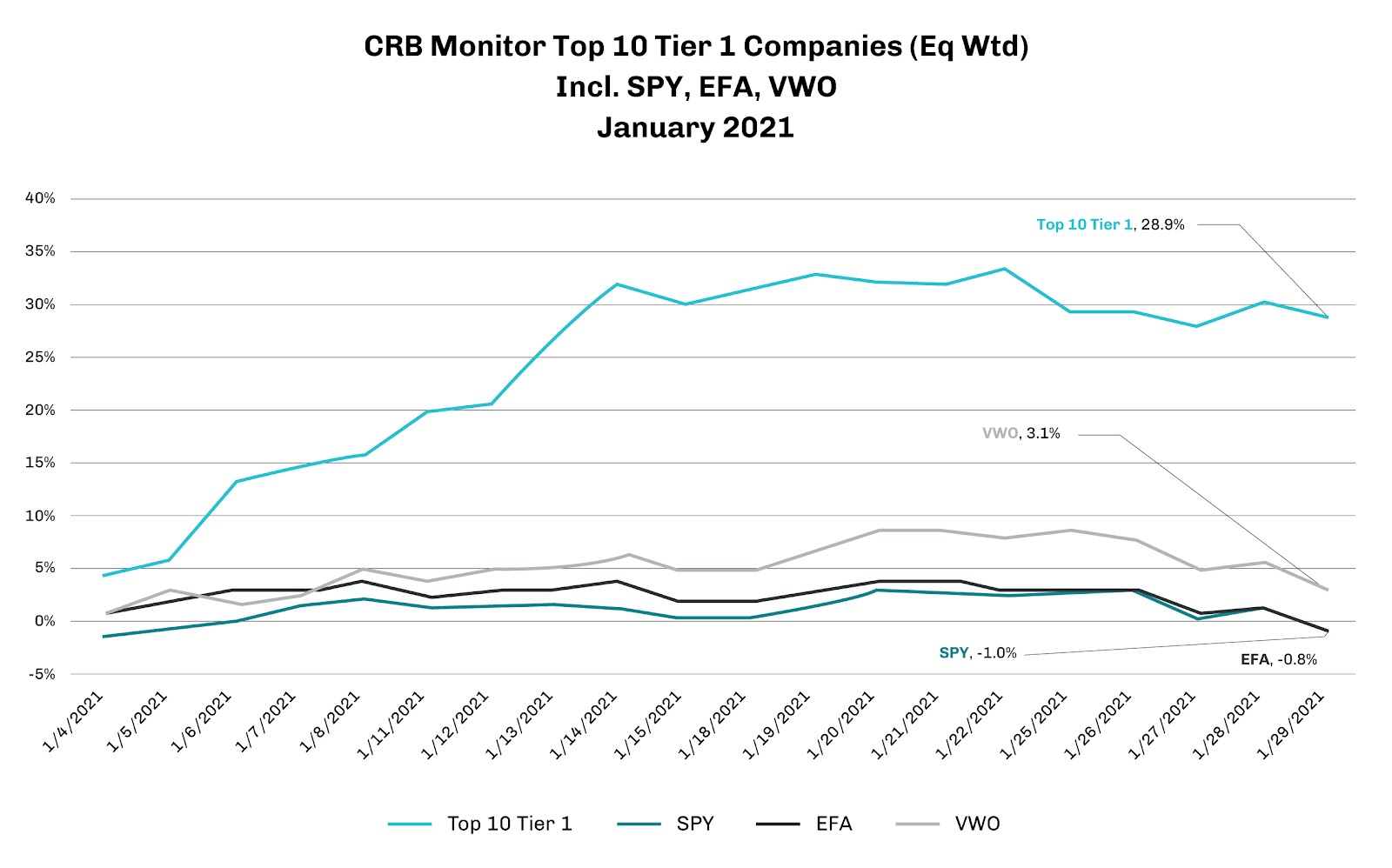 We started 2021 with an active month for news related to publicly-traded cannabis companies. The following is a sampling of highlights from the January 2021 cannabis news cycle, as tracked by CRB Monitor.  Included are CRB Monitor’s proprietary Risk Tiers.

Interested in learning more about the CRB Monitor Securities Database? Visit our website to request more information and to  get in touch with our team.

The information provided herein presents general information and should not be relied on as legal advice. If you have specific questions regarding a fact, please consult with competent legal counsel about the facts and laws that apply.