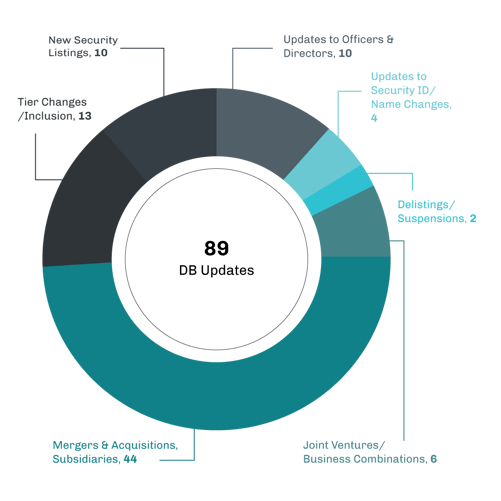 The cannabis news cycle never seems to sleep, and in May 2021 investors were treated to a new crop of stories that continue to tell the evolving story of this emerging industry. There was a continuation of the M&A activity that started in Q1, with the closing of two significant Tier 1 CRB deals: Jazz Pharmaceuticals' acquisition of GW Pharmaceuticals plc and Tilray’s completion of its acquisition of Aphria Inc. Both transactions were blockbuster events for the cannabis industry, and during May, two new, impactful M&A deals hit the news cycle. First, Hexo Corp. (TSX: HEXO) announced its second major acquisition of 2021 with its proposed purchase of 100% of 48North Cannabis Corp. 48North (TSXV: NRTH) is a Tier 1B small cap ($50mm) CRB that holds licenses in Canada for both cultivation and sale of medical and recreational cannabis. This follows HEXO’s $235mm purchase of Zenabis Global Inc. (TSX: ZENA) a few months ago, which is a clear indication of HEXO’s strategy of maintaining its position in both medical and adult use cannabis markets. The other significant M&A deal in May in the publicly-listed space was the proposed acquisition of Inner Spirit Holdings Ltd. (CSE: ISH) by Sundial Growers Inc. (NASDAQ: SNDL). The Inner Spirit deal, valued at approximately $130 million, will further solidify Sundial’s status as a significant player in the legal cannabis space, lifting its market capitalization to approximately $2 billion, which further solidifies its position in the “Top 10” of pure play Tier 1 CRBs.

The greatest challenge faced by proponents of the MORE Act (assuming it passes the US House of Representatives) is for it to pass the Senate, which is a long shot based on the current political divide there. In other words, for proponents of cannabis legalization/decriminalization, there isn’t a wealth of optimism here given the history of weak Republican support for cannabis reform. Stay tuned for updates!

In a continuation from April’s weak performance, cannabis-linked equities were mixed but were generally lower for most of the month of May 2021. A rebound in the final week of May was of little consolation, as CRBs (with a few notable exceptions) finished in negative territory for the month.

Tier 1A multi-state operator (MSO) Columbia Care (NEO: CCHW)’s stock lost more than 13% during the month of May in spite of strong quarterly earnings that were reported in the middle of the month. In fact, according to Columbia Care’s CEO, Nicholas Vita, “in Q1 we generated $92.5 million in combined revenue, up 13% sequentially and 220% year-over-year.” Investors welcomed this news, pushing CCHW’s stock up 15% between May 21 and May 27, before it collapsed once again over the last few trading days of the month.

Tier 1A CRB Tilray, Inc. (Nasdaq: TLRY), now the largest pure play CRB by market cap and revenue, fell by more than 25% in the first two weeks of May before buyers jumped back in and pushed the stock higher and it finally closed down 9% for the month. With an average daily volume of more than 33 million shares (~$600mm) Tilray is, by far, the most actively-traded CRB and sadly one of the most volatile. As we wrote in an earlier newsletter, “TLRY has famously been one of those vulnerable companies, with a volatile performance history and a reputation as sometimes impossible to borrow (and therefore a settlement challenge).”

Tier 1A CRB Canopy Growth Corporation (TSX: WEED), the number two pure play CRB by market cap, suffered a similar fate, losing nearly 9% as many CRB stocks pulled back in May. WEED has fallen a breathtaking 60% from its high in early February, when CEO David Klein announced better-than-expected quarterly earnings numbers. However, since mid-February it appears as though the wind has been knocked out of Canopy’s sails. Investors in Canopy Growth must be wondering where the bottom is, and when it’s safe to jump back in.

On a positive note, Sundial Growers Inc. (NASDAQ: SNDL)‘s shares soared on two announcements that made investors optimistic: first, SNDL announced in early May its acquisition of Inner Spirit Holdings and Spiritleaf Retail Cannabis Network; and second, SNDL’s announcement of Q1 earnings, which sent is stock skyward once again. The gist of the announcement, from CEO Zach George, was that SNDL was happy to announce “Sundial's first-ever quarter with positive earnings from operations and adjusted EBITDA”.  Investors responded in kind, and SNDL shares closed out May more than 12% higher.

In spite of their extreme volatility during the month, the CRB Monitor Top 10 Tier 1 cannabis-linked equities basket fell by just 3.5% in May 2021, on an equally-weighted basis, underperforming major equity indexes (US large cap, International, Emerging Markets). 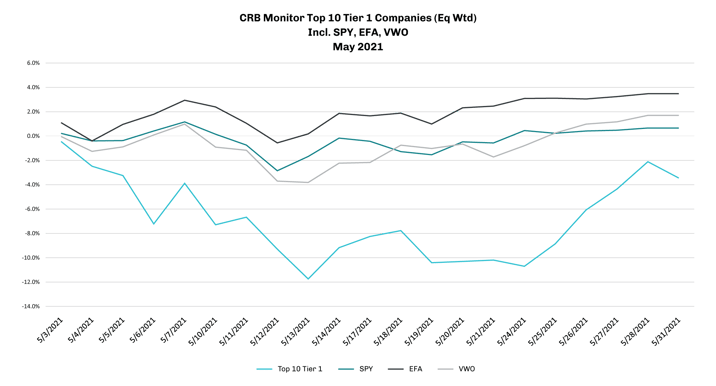 May 2021 was a continuation of a busy news cycle for publicly-traded cannabis-linked companies.  The following is a sampling of highlights  from the May 2021 cannabis news cycle, as tracked by CRB Monitor.  Included are CRB Monitor’s proprietary Risk Tiers.