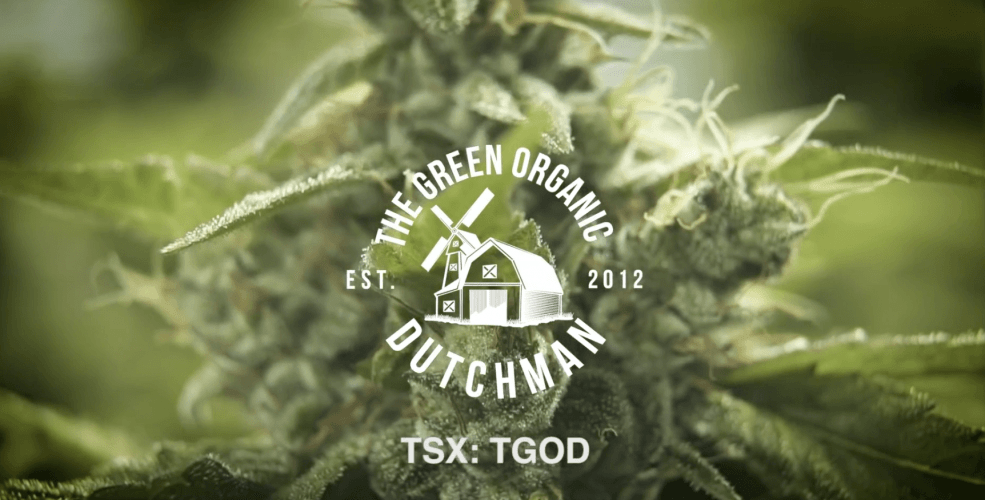 On September 10, 2021, Tier 1 CRB The Green Organic Dutchman, Inc. (TSX: TGOD) announced that it had received its final approval to voluntarily delist its common stock and warrants from the Toronto Stock Exchange (TSX) and simultaneously list them on the Canadian Securities Exchange (CSE). TGOD is not considered a significant player in the cannabis space, given its small market cap (~$100mm) and low share price (~CAD 0.20); however, the change in listing to the CSE could have serious implications for cannabis-themed ETFs that include TGOD in their holdings.

Why this sudden change in listing?

In a recent press release from August 26, this quote from Sean Bovingdon, Chief Executive Officer and Interim Chief Financial Officer of TGOD tells the whole story:

“The board of directors and management of the Company believe that listing the Common Shares and Warrants on the CSE will be beneficial to the Company and its securityholders, as a result of the Company being subject to reduced filing fees and obligations. In line with recent corporate objectives, the CSE Listing will allow the Company to accelerate plans for an entry into the United States ("U.S.") market. As mentioned in the Company's most recent quarterly results communication, initial discussions have commenced with approximately half a dozen groups in the U.S., in respect of the Company's plans to enter into the U.S. market. In order to advance these discussions, the CSE Listing is vital to show credibility in terms of being able to make an investment or complete a transaction.”

The Green Organic Dutchman has 5 wholly-owned subsidiaries, 4 of which are licensed Tier 1A CRBs. These businesses collectively hold 5 active cannabis licenses for retail, cultivation, and processing of medical and recreational marijuana, as well as hemp. The fifth (non-Tier 1) subsidiary is Califormulations LLC, a Tier 2 business dedicated to cannabis-infused beverage innovations. The licensed Tier 1A subsidiary businesses are all located in Ontario, Canada. With that said, and given Sean Bovingdon’s statement above, TGOD’s corporate structure will likely expand to include licensed US subsidiary CRBs in the near future.

Compliance Issue, Rebalance Nightmare or Both?

As stated above, TGOD’s management is moving its listing to the CSE for the express purpose of expanding its operations (marijuana cultivation, retail, processing, etc.) into the US. The Toronto Stock Exchange (similar to the NYSE and Nasdaq) prohibits CRBs with US operations to list on its exchanges (TSX and TSXV), given that, in the words of the TSX, “it is illegal under U.S. federal law to cultivate, distribute or possess marijuana in the United States”. The implication is that the TSX will not list the shares of any company that technically violates the laws of any country.

Conversely, the Canadian Securities Exchange openly states that it does not prohibit companies with ties to US Marijuana from listing their shares, but rather requires only a risk disclosure stating any direct connection to US marijuana operations. As such, a CSE listing is a red flag for financial institutions’ compliance groups and would, in most cases, force a liquidation of TGOD (and any other CSE-listed Tier 1 CRB with US operations) across their investment platforms.

TGOD’s historically-volatile share price has been particularly vulnerable during times of index rebalancing, but its extreme illiquidity has posed a similar problem for traders on a number of other, random dates as well. We observe how limited available liquidity in the market has caused headaches for investors and traders. The following table displays the top 15 single day changes in TGOD’s share price since January 2019 and the corresponding volume as a percentage of average daily volume (ADV) over the same period. Here are 15 dates when shares moved by 18% of more, accompanied by high share volumes:

For exchange traded funds (ETFs) that track indexes, TGOD’s announcement could result in its removal and subsequent liquidation on or before each fund’s next scheduled rebalance. This is where things get tricky, because we would expect this event to trigger a significant sale of TGOD shares in the market. The largest holder, The Prime Alternative Harvest ETF (NYSE Arca: MJ) would have more than $11 million of the stock to liquidate - while the average daily traded volume (ADV) in US dollars is just $1 million. In other words, the event would cause a sale in the market of more than 10 days ADV, which could potentially result in a significant drop in price. And this is only for one ETF that holds TGOD, there would presumably be others that hold the stock that would need to liquidate as well. 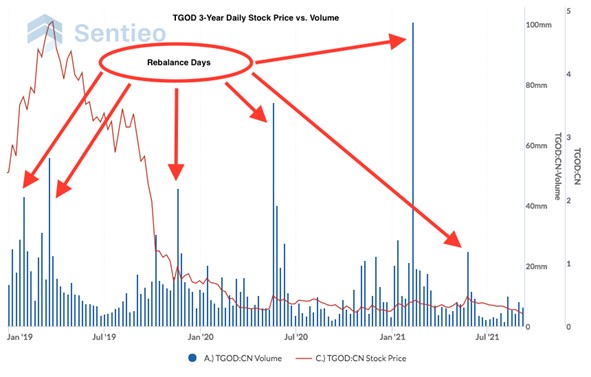 The chart above shows the last 2.5 years of TGOD’s daily share volume and its stock price over the same date range. The extreme spikes in volume, which appear to be at 3 and 6 month intervals, most likely indicate dates when index rebalancing events occurred. These are times when indexed ETFs, like MJ, would have traded a large quantity of TGOD shares in order to bring the ETF’s holdings back in line with the index. The lack of supply/demand for TGOD shares in the market, combined with these sudden, sizeable buy/sell orders, can cause the bid-ask spread to widen and the share price to move, sometimes drastically.

Given this history, indexed ETFs like MJ would most likely need to liquidate their full positions in TGOD on or before their next rebalance dates following CSE listing. For a relatively small position in the fund, the rebalance could translate into significant transaction costs, which would be borne by MJ’s shareholders. As an example, if the stock price were to move down by 20% as a result of the liquidation, this transaction would cost shareholders of the fund more than $2 million in transaction costs.

Other TSX-listed CRBs to watch

We are not aware of any additional, imminent TSX delistings/CSE re-listings. With that said, here is an abridged list of Tier 1 CRBs that have their primary listings on the TSX or TSXV exchanges. Should these companies make the decision to directly acquire US-based licensed cannabis businesses, they would effectively forfeit their ability to list in Toronto and would need to move their listings elsewhere, with the CSE as a likely destination. CRB Monitor will be keeping an eye on them: