Why FinCEN's Marijuana Banking Count Is Too High

Most financial institutions are aware of the importance of obtaining accurate and up-to-date information for compliance with marijuana-related Bank Secrecy Act/Anti-Money Laundering regulatory requirements. Since 2015, FinCEN has produced quarterly “Marijuana Banking Updates” to track depository institutions (DIs) that provide banking services to Marijuana-Related Businesses (MRBs). The data is based on suspicious activity reports (SARs) filed by financial institutions as required by FinCEN’s 2014 guidance. 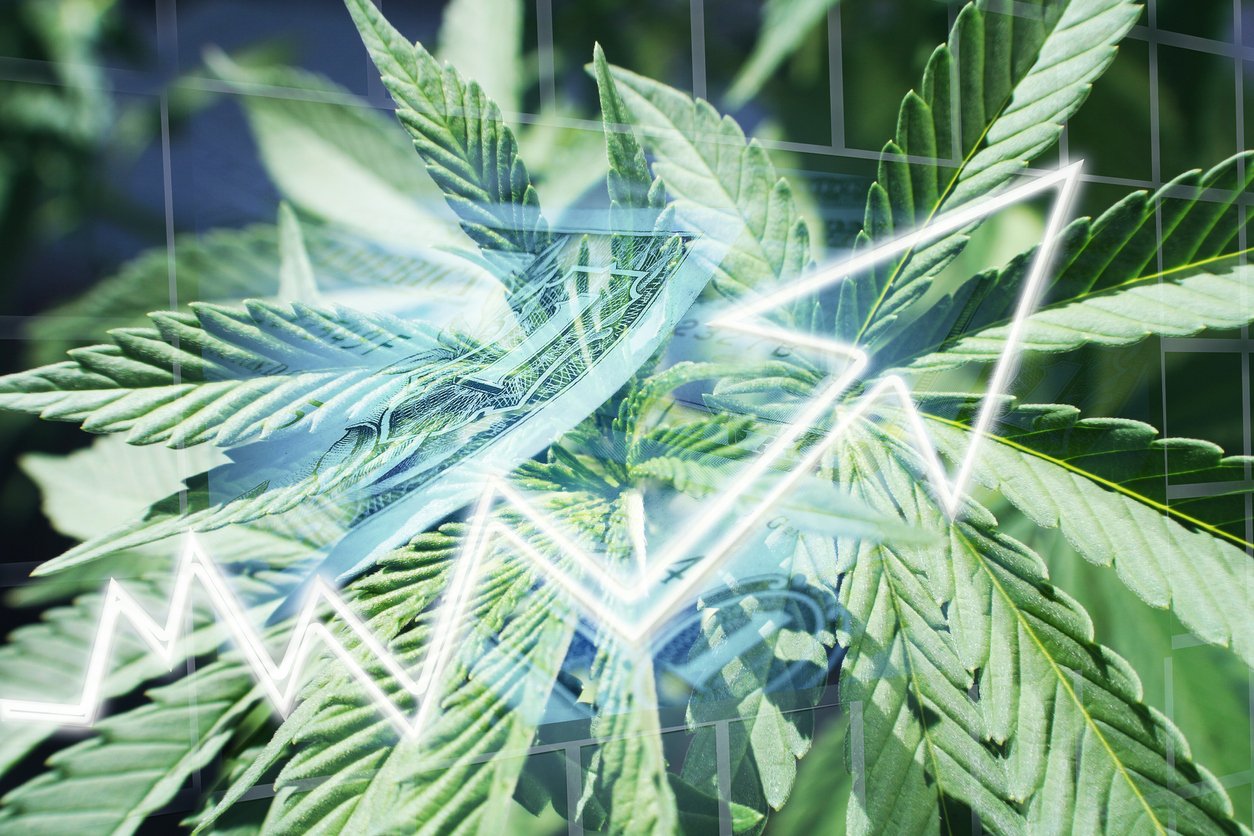 As of the most recent report dated June 30, 2020, 695 banks and credit unions were actively banking marijuana-related businesses in the United States, a slight decrease from the 739 and 710 figures reported in the previous two quarters, respectively. FinCEN states that the reason for the short-term decline is primarily attributed to COVID-19. Reduced staffing at banks may have caused a delay in continuous SARs filings, while the first half of the year also showed a reduced number of operating MRBs due to nationwide lockdowns.

The number of banks cited in the FinCEN quarterly updates is often touted within the industry as the number of DIs “serving” MRBs. However, when speaking to insiders (e.g., bankers who have set up entire programs to serve marijuana businesses), the actual count of DIs “actively and meaningfully” serving the industry is currently closer to 60-100. Why are the numbers cited in the FinCEN report arguably inflated? To answer that, we must look more closely at the type of SARs filed, rely on insider knowledge within the industry, and understand the various ways of interpreting cannabis banking regulations.

As of the second quarter of 2020, FinCEN received a total of 142,120 SARs using key phrases associated with MRBs. To be counted in the total of “actively banking” MRBs in the quarterly banking update, FinCEN includes any DI that filed either a Limited OR a Priority SAR during the first quarter, whereas Termination SARs are not included (for more information on the various types of SARs, see our blog “Who is Filing Suspicious Activity Reports on the Marijuana Industry? New Data May Surprise You”).

While it is fair to consider DIs that file Limited SARs as knowingly and proactively banking MRBs, it may be inaccurate to assume DIs filing only Priority SARS are doing so. Oftentimes, Priority SARs are filed by DIs that are not willing to bank with MRBs, but the relationship is not terminated simply because of red flags or investigations. Priority SARs often are an indication that a DI does not proactively bank marijuana. This could potentially explain the recent drop of FinCEN’s reported figure of DIs actively banking MRBs from 710 to 695, if the number includes financial institutions that went from previously only filing Priority SARs to not filing any MRB SARs at all or only “Termination” SARs in the second quarter of 2020.

The Exception, Not the Rule

Discussions with financial institutions and MRBs throughout the country have indicated that many DIs that are included in the FinCEN count are not actively banking MRBs, yet have made a limited number of exceptions to bank-wide policies. These exceptions are typically granted to a small number of MRBs based on previously established relationships with high net-worth clients and a lower perceived risk. While these DIs are not proactively or meaningfully looking to bank MRBs, they make exceptions to their policies to accommodate larger account holders and maintain relationships. As a result, they will file “Limited” SARs on a few marijuana-related relationships, while not proactively or meaningfully serving the industry.

Defining the Landscape of MRBs

Due to a varying interpretation of regulatory guidance, there continues to be discrepancies in what DIs define as “marijuana-related,” which can greatly impact the accuracy of SARs filings. Our seminal white paper, Defining “Marijuana-Related Business, includes a specific framework that DIs can use to consistently determine when to file marijuana-related SARs. While it is generally accepted that Tier 1 (“Direct”) MRBs require a SAR, there is less consensus around when/if to file SARs on Tier 2 (“Indirect” or “Ancillary”) and Tier 3 MRBs. Out of an abundance of caution, many DIs may file “Marijuana-Related” Limited/Priority SARs on Tier 2 and Tier 3 entities when generally not required, further inflating the count of “marijuana-friendly” institutions.

Furthermore, The Agriculture Improvement Act (2018 Farm Bill) changed the definition of marijuana to exclude “hemp” and “hemp-derived” products. As a result of the guidance, banks are not required to file SARs if a business is growing and cultivating hemp. Updated guidance, issued in June 2020, states that, “if the proceeds of the businesses are kept separate, or the customer and its financial institution are able to identify which proceeds are marijuana-related and which are hemp-related, then the 2014 Marijuana Guidance, including specific SAR filing, applies only to the marijuana-related part of the business.” Despite this significant change in requirements, some DIs may still file marijuana-related SARs on hemp-related businesses unnecessarily.

As regulations continue to change at both the state and federal level, distinguishing between tiers of MRBs, hemp-related businesses (HRBs), and CBD-related businesses (CBD-RBs) may become more complex. As such, it is easy to see how the FinCEN figures can become inflated when the underlying accuracy of SARs data is questioned. The overall relevancy of keywords captured from those SARs filings can leave room for misinterpretation and ultimately does not appropriately describe a bank’s policies and activities.

Knowing Is Half the Battle When Choosing to Terminate MRBs

As the cannabis industry continues to expand, more financial institutions, even those that have a “no cannabis” policy, will continue to uncover MRBs during their compliance reviews. The cumulative number of marijuana-related Termination SARs grew from 7,326 in March 2017 to 32,530 in June 2020, representing a 58% compound-annual growth rate. 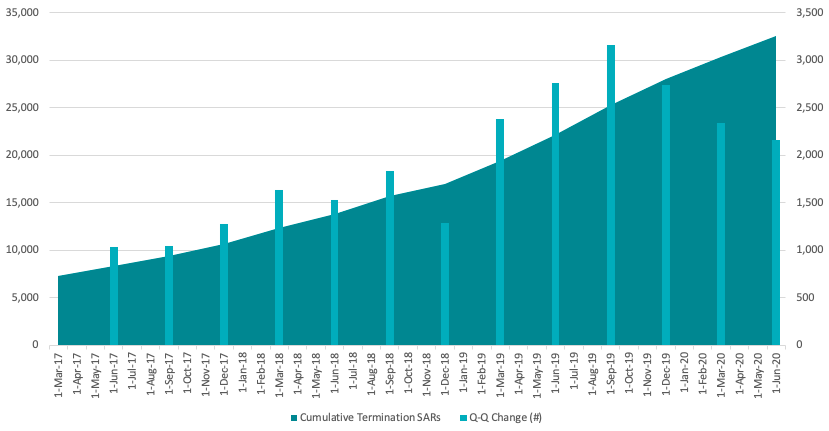 While the FinCEN data is interesting and informative (i.e. a clear increase in DIs serving MSBs is evident), the accuracy of the number of DIs that are actually “banking” marijuana should be reevaluated. Additional information on the size, types, and locations of institutions, as well as the types of MRBs accessing services, would further expand the usefulness of the report. As regulatory definitions and the depth and consistency of reporting improve, these statistics will increasingly be valuable to both policymakers and bankers alike.

In the meantime, financial institutions need access to complete, accurate, and up-to-date data on MRBs and beneficial ownership. CRB Monitor can supply an industry-leading relational database of cannabis corporate intelligence.

Is your compliance program backed by comprehensive data on the cannabis industry? Do you have access to reliable information about MRBs to determine your firm’s level of risk exposure? Read more on our blog: You Don’t Know Pot: 5 Fundamentals to Understanding, Identifying, and Monitoring for CRBs. Or visit our website to request more information and get in touch with our team.

The information provided herein presents general information and should not be relied on as legal advice. If you have specific questions regarding a fact, please consult with competent legal counsel about the facts and laws that apply