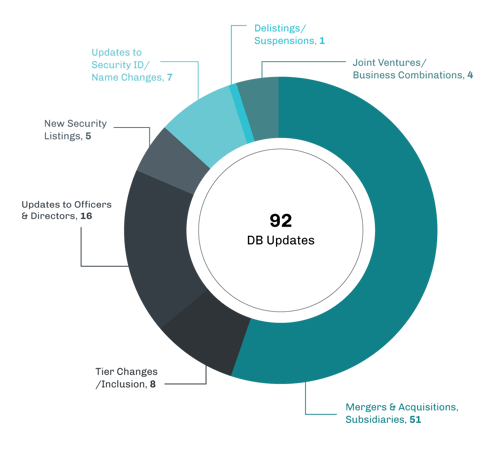 CRB Monitor is pleased to announce that we have expanded the CRB Monitor securities database to include coverage of all ETFs that hold at least one "pure play" Tier 1A or Tier 1B cannabis-related security. [We define "pure play" as a company that earns, or intends to earn, at least 50% of its revenue from cannabis-related activities.] Our research has uncovered 51 non-cannabis-themed ETFs to the CRB Monitor database; we add these to the existing list of 23 listed cannabis-themed ETFs, to bring our ETF coverage to 73 funds. This expansion is great news for financial institutions who need to monitor all cannabis exposure, with no exceptions, across their investment and custody platforms.

Also during the second quarter of 2021, CRB Monitor announced the creation and addition of our Cannabis-Linked Sector Classification System (CLS) to our global universe of ~1,400 publicly-traded issuers and their 1,500+ securities listed on six continents. A complete summary and description of the methodology can be found on the CRB Monitor website.

Given the magnitude of the M&A activity completed in Q1 2021, June seemed tranquil in comparison.  With that said, investors were treated to plenty of notable corporate activity in the cannabis industry.  Some highlights:

The Valens Company Inc. (TSX: VLNS), a diversified, Canada-based Tier 1B CRB,  completed its $40 million acquisition of Green Roads, a leading US-based hemp-derived CBD manufacturer.  With this purchase, it is clear that Valens is looking to be a dominant player in the production and distribution of both THC- and CBD-based products.  Valens also signed an agreement in late June to manufacture beverages and edibles for Gallery Brands, a premier Canadian distributor.  In spite of this positive news, Valens’ shares fell significantly in June, closing more than 11% lower for the month.

TPCO Holding Corp. (NEO: GRAM.U), aka The Parent Company, has been making its presence known, having recently acquired several cannabis businesses in California, the latest of which is called Calma, a dispensary located in the West Hollywood area.  TPCO, originally launched as a SPAC, is widely known as the pet project of entertainment magnate Shown “Jay-Z” Carter and his record company, Roc Nation.

Australian Tier 1B CRB  Creso Pharma Ltd. (ASX: CPH) and Ontario-based Tier 1B magic truffle manufacturer Red Light Holland Corp. (CSE: TRIP) have agreed to merge their businesses to form The HighBrid Lab, a new entity that will specialize in both cannabis products and psychedelics.  According to a mid-June press release, “The Combined Company is expected to have a cash balance of approximately C$45 million, providing considerable financial flexibility to progress its growth strategy.”  One familiar face on the new company’s board will be Bruce Linton, who has held senior positions at several cannabis-related entities including former CEO of Canopy Growth (TSX:WEED).

And the acquisition train keeps rolling for Tier 1B Verano Holdings Corp. (CSE: VRNO).  Verano added its 34th medical cannabis dispensary, called MUV, during the month of June 2021.  Per the CRB Monitor database, this brings Verano’s active and pending license count to 98 across 18 states in the US.

On June 22nd Connecticut’s governor, Ned Lamont, signed into law Senate Bill 1201, aka “AN ACT CONCERNING RESPONSIBLE AND EQUITABLE REGULATION OF ADULT-USE CANNABIS.”   With his signature, Connecticut became the 19th state (plus the District of Columbia) where cannabis is legal for adult use.

This law was designed to be comprehensive, covering essentially every aspect of life as it is touched by the cannabis industry.  Here is a complete list of the aspects of Connecticut’s newly-signed cannabis law.

Per CRB Monitor, Connecticut currently has 274 active medical marijuana licenses that are held by 18 cannabis businesses (CRBs), of which several are subsidiaries of two publicly-traded CRBs, Curaleaf Holdings, Inc. (CSE: CURA), and Trulieve Cannabis Corp. (CSE: TRUL).  Given that Connecticut’s expansion into legal adult-use cannabis sales will occur sometime in 2022, it is safe to anticipate new license issuance and new interest from Tier 1 publicly traded CRBs in the Q3 and Q4, so stay tuned!

June 2021 was a somewhat mixed month for cannabis securities’ performance, as summer began in earnest and the world cautiously emerged from the COVID-19 pandemic.   With that said, the cannabis industry continues to be a volatile space for investors and the largest CRBs do not fail to confirm that statement, regardless of the season.

Tier 1B CRB Green Thumb Industries Inc. (CSE: GTII), a manufacturer and distributor of cannabis brands such as Beboe, Dogwalkers, and Dr. Solomon’s, extended its gains in June, returning more than 13% for the month.  Still on a veritable high following exceptional Q1 results, Green Thumb continued the expansion of its Massachusetts operations with the completion of its acquisition of Liberty Compassion, Inc., which includes both cultivation and retail.

Shares of Tier 1B multi-state operator Verano Holdings Corp. (CSE: VRNO) were 12.5% lower for the month amidst the news in mid-June that they were now DTC-eligible. Investors perceive this as a positive in the long-term, as it should bring in a broader shareholder base and increased trade volume.

Tilray, Inc. (Nasdaq: TLRY)’s shares once again provided a bit of drama for investors, soaring 26% between June 1st and June 9th, only to fall back to earth to the point where the stock was trading essentially flat by June 18th, before closing out the month up 6.5%.  Still up more than 90% for the year, TLRY’s return seems to be based on something other than fundamentals, given that its blockbuster acquisition of Aphria earlier in 2021 has resulted in balance sheet debt of more than $300 million.  But wise investors are aware of this volatility, which is largely driven by heavy stock borrow demand combined with a low free float.  And with all this debt hanging in the balance, Irwin Simon, Tilray’s Chairman and CEO, issued a press release on June 29th, asking his shareholders for help:

“Tilray is seeking to increase the number of authorized shares of common stock, so that it may use its stock to acquire and finance attractive businesses that would help Tilray grow and create value for stockholders.”

Investors did not appear to love this announcement, given that Simon is asking for more than a 50% dilution with this issuance.  Shares fell by about 5% on the 29th and stayed there on the 30th.

Cronos Group Inc. (TSX: CRON) delivered shareholders a return of 6.5% in June, as investors appeared to look favorably upon the mid-month announcement of Cronos’ subsidiary’s buy of a long-dated option on approximately 10.5% of vertically-integrated US CRB PharmaCann.  While the purchase is contingent on US federal legalization, investors are seeing these types of strategic moves essential for Cronos’ competitiveness in the cannabis space, given the recent flurry of M&A activity that has left Cronos in 8th place in terms of market capitalization.

The CRB Monitor Top 10 Tier 1 Pure Play cannabis-linked equities added 1.0% in June on an equally-weighted basis, which landed it in the middle relative to major equity indexes (US large cap, International, Emerging Markets). 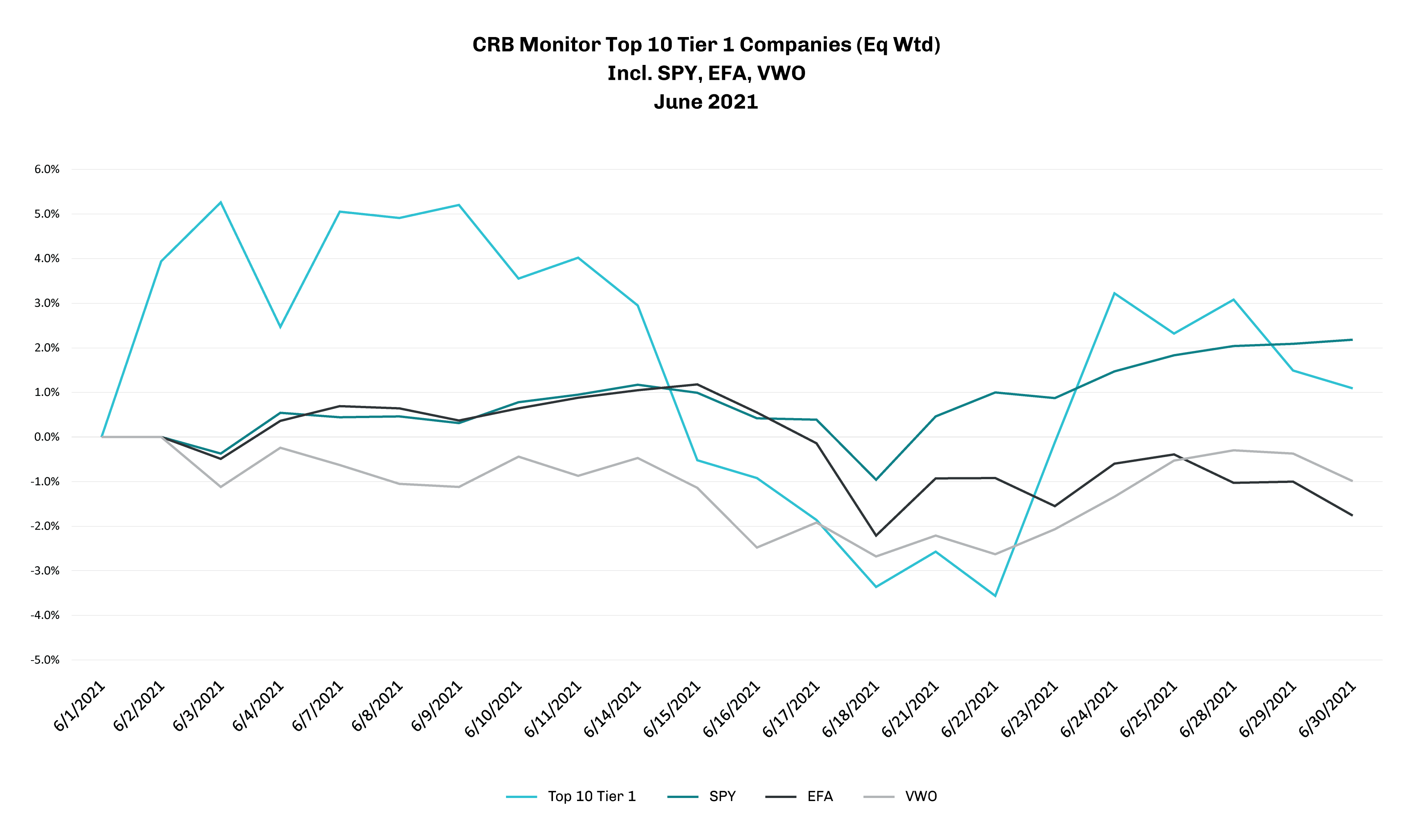 June 2021 was a continuation of a busy news cycle for publicly-traded cannabis-linked companies.  The following is a sampling of highlights  from the June 2021 cannabis news cycle, as tracked by CRB Monitor.  Included are CRB Monitor’s proprietary Risk Tiers.