In 2021, CRB Monitor’s research team has made more than 1,500 updates to securities’ information and has added more than 6,500 news-related source documents to the CRB Monitor database. Here is a summary of the updates for October 2021: 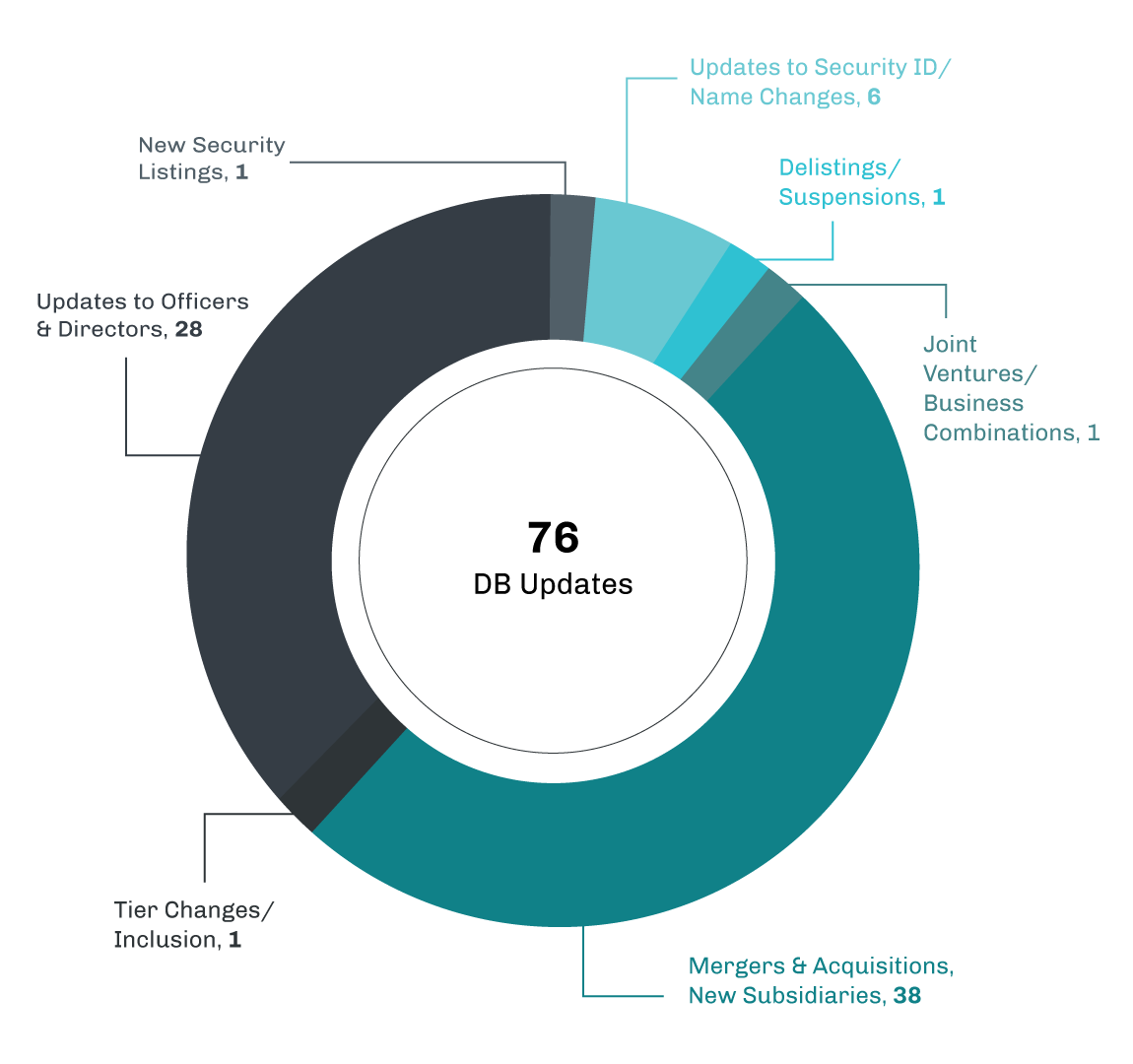 The cannabis M&A train keeps rolling, and CRB Monitor has been tracking several cannabis-linked mergers and acquisitions throughout 2021. Here are some of the October highlights:

Amidst a prolonged correction in the cannabis industry, several top-tier CRBs initiated or completed acquisitions of cannabis businesses in October. At the top of the list was Tier 1B Trulieve Cannabis Corp. (CSE: TRUL), which finally completed its acquisition of Harvest Health & Recreation, Inc. (CSE: HARV, OTCQX: HRVSF). Under the terms of the purchase, Trulieve has acquired all of the issued and outstanding subordinate voting shares, multiple voting shares and super voting shares of Harvest Health. As a result, Harvest delisted and is now a wholly-owned subsidiary of Trulieve. In CRB Monitor terms, this acquisition expands Trulieve’s footprint significantly, as Harvest controls more than 170 cannabis licenses (active or pending approval) in the US and Canada.

Wakefield, MA Tier 1A Curaleaf Holdings, Inc. (CSE: CURA), now the largest pure play CRB by market capitalization, expanded its operations in Colorado with its acquisition of Los Sueños Farms and its related entities. In the words of Curaleaf’s Executive Chairman, Boris Jordan, “The vertical integration of our business in Colorado significantly strengthens Curaleaf's market presence in the second-largest state cannabis market in the US.” When this acquisition is final, the strategic addition of Los Sueños Farms increases Curaleaf’s active (or pending approval) license total to 131, covering a total of 20 states in the US.

Also in October, small cap Tier 1A CRB Agrify Corporation (NASDAQ: AGFY) announced its $50 million acquisition of Cascade Sciences. According to the announcement, “Agrify has expanded its core business beyond cultivation by gaining instant access to complementary and highly attractive areas of the supply chain.” Located in Massachusetts, Maine, and Delaware, Agrify currently holds a MA license to cultivate industrial hemp, but is clearly looking to expand operations through this acquisition.

Tier 1B CRB High Tide Inc. (TSXV: HITI) moved toward growing its global footprint in the United Kingdom with its October acquisition of Scotland-based Blessed CBD. According to HITI’s press release, “Blessed has quickly grown to become one of the most popular brands for hemp-derived CBD products across the UK, including CBD oils, creams, gummies, and capsules.” And in the words of High Tide CEO Raj Grover, “This acquisition marks our entry into the highly lucrative and rapidly-growing UK CBD space, which we expect to serve as a launching pad for High Tide to further penetrate the EU market for hemp-derived CBD products, while also taking advantage of cross-selling opportunities related to our in-house product lines.” With more than 112 active licenses in five provinces, High Tide already has a strong presence in Canada. The Blessed CBD acquisition not only diversifies HITI’s product set but also expands its operations globally.

Up-and-coming Tier 1B CRB TPCO Holding Corp. (NEO: GRAM.U) continued to expand its retail operations in California with its acquisition of 100% of the equity of Coastal Holding Company, LLC. According to the October 4th press release, the acquisition price is “$16.2 million in cash with contingent consideration of up to $40 million in equity of The Parent Company upon completion of milestone events and a $9 million option to acquire the remaining equity of a  southern California dispensary that Coastal currently holds a minority interest in.” In the words of TPCO’s CEO Troy Datcher, “In just over four months, we have more than tripled our operating retail stores in California." What all this amounts to is that TPCO’s operations have been growing rapidly, as they now hold 33 active licenses in California and Massachusetts, covering cultivation, retail, wholesale, and manufacture/processing.

The move toward legal cannabis continues in earnest, with one interesting development coming out of Europe and some updates at the federal and state levels.

On October 22nd, it was reported that the Government of Luxembourg became the first European nation to legalize the cultivation and usage of cannabis. According to The Guardian, “Adults in Luxembourg will be permitted to grow up to four cannabis plants in their homes or gardens under laws that will make it the first country in Europe to legalize production and consumption of the drug.”

On October 6th, Sens. Elizabeth Warren (D-MA) and Cory Booker (D-NJ) sent a letter to Attorney General Merrick Garland making the case that the Justice Department should initiate a de-scheduling process in order to “allow states to regulate cannabis as they see fit, begin to remedy the harm caused by decades of racial disparities in enforcement of cannabis laws, and facilitate valuable medical research.”

Also in October, lawmakers in Rhode Island are taking up the topic of adult-use legalization and are contemplating what a cannabis regulatory system that allows for adult usage would look like. According to Cannabis Business Times: “State Sen. Josh Miller, who sponsored an adult-use cannabis bill that cleared the Rhode Island Senate in June 2021, told the news outlet that lawmakers are debating whether to establish a new cannabis commission to regulate the adult-use market, or whether the adult-use industry should fall under the authority of the Rhode Island Department of Business Regulation, which oversees the state’s medical cannabis program.”

Sour grapes in the South: In Mississippi, one of just a handful of states that have not legalized medical use cannabis, lawmakers have been working on a proposal to create a medical marijuana program, but Republican Gov. Tate Reeves has not said when he will call a special session to put it into law. Among other updates, this version of the bill would increase the size of growing facilities and impose a 5% excise tax on marijuana sales, which would be the original $15/ounce in the last version of the bill. And while Republican Gov. Tate Reeves spent most of the summer suggesting that he'd call a special session to pass a cannabis program into law, he has not done so, citing a disagreement with legislators over allowable dosage sizes. We similarly reported in September that Governor Reeves slowed the progress on a medical cannabis legalization bill, and we will be following the progress in Mississippi in the months to come. 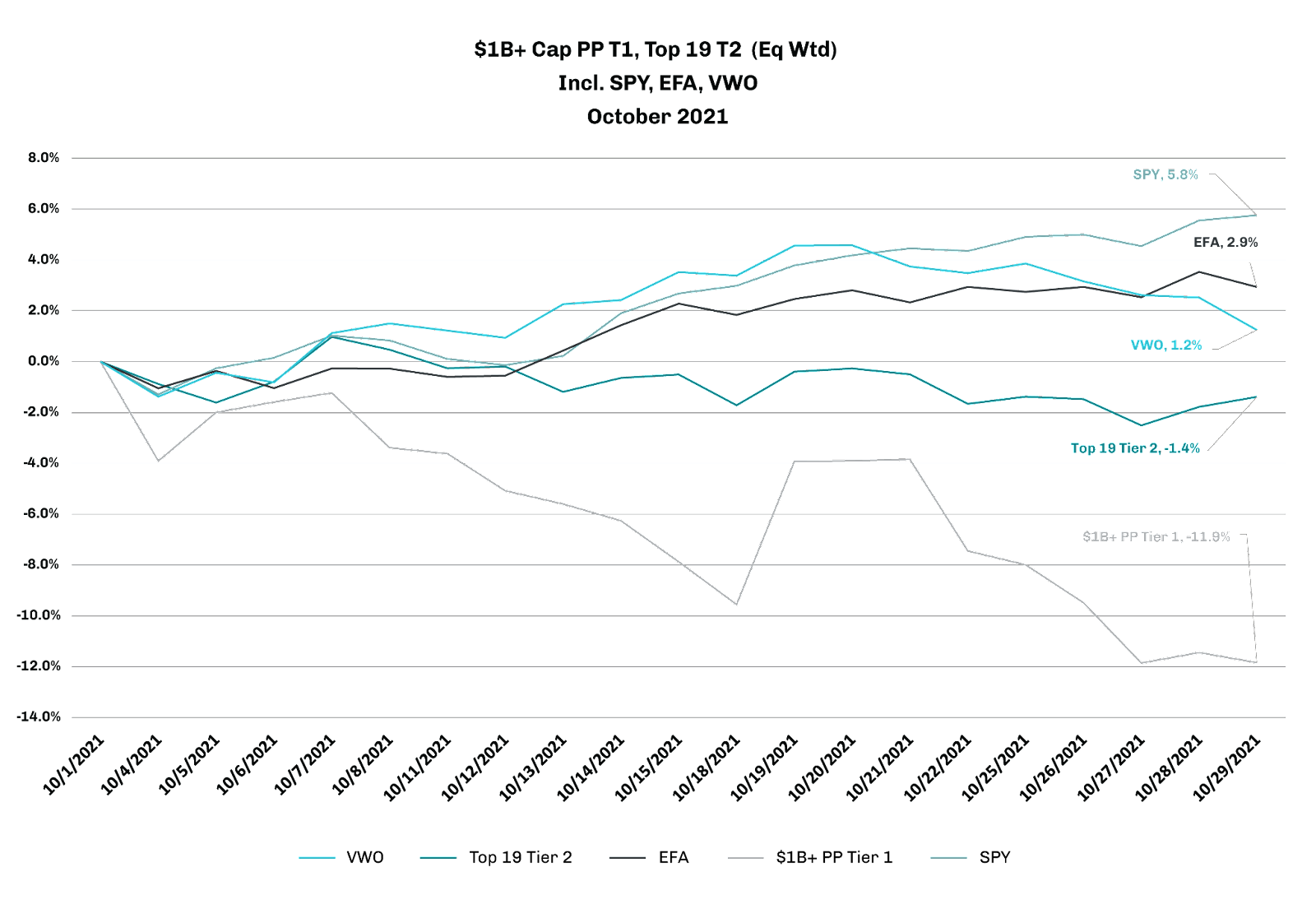 October was, once again, less than encouraging for Cannabis-linked equity performance for the majority of Tier 1 CRBs. We have to believe that value (and, for that matter, growth) investors will eventually find these companies cheap enough to jump back in, but October simply was not the month for that. One of a few non-negative-performing companies in the $1+ billion market capitalization club was Tier 1B MSO Verano Holdings Corp. (CSE: VRNO). Verano, with its ever-expanding US operations, returned 1.9% in October amid the news that institutional lender to CRBs, Tier 2 AFC Gamma, Inc. (Nasdaq: AFCG), announced that it funded $50 million of a $120 million credit facility tranche to Verano. Verano has been growing fast in the US, acquiring Tier 1 businesses in several states over the last 6 months and the $50 million should facilitate further growth. VRNO now has a presence in 18 states and holds, through its subsidiaries, more than 130 active or pending-approval cannabis licenses.

The only other large cap pure play Tier 1 CRB with positive performance in October was Jazz Pharmaceuticals plc (Nasdaq: JAZZ), which was up 2.4% in October and outperformed most of the pure-play Tier 1 field. JAZZ is a unique case, as they became a Tier 1B CRB (from a non-CRB) at the beginning of 2021 with their blockbuster $8 billion acquisition of GW Pharmaceutical, manufacturer of the only cannabis-derived product that is FDA-approved (Epidiolex). JAZZ has been on a streak of beating quarterly earnings estimates, and YoY EPS are projected to be up 25% in 2021.

On the other end of the spectrum was Tier 1 MSO Columbia Care Inc. (CSE: CCHW), which was down more than 24% in October, and has fallen by a breathtaking 55% year-to-date. From the news cycle alone, it would appear that Columbia Care continues to make inroads in the areas of new product development and operational expansion (and revenue estimates are +145% for 2021); however, something must be wrong as shareholder value has eroded significantly in 2021 and EPS are not expected to be in positive territory until 2022. Columbia Care operates in 18 states and holds 88 active cannabis licenses.

Currently the largest CRB by market capitalization, Tier 1A Curaleaf Holdings, Inc. (CSE: CURA) was down more than 20%, which made it one of the worst-performing large CRBs for the month of October. As we reported above, Curaleaf’s operations (now in 20 states) continue to expand, but investors have failed to get the message, as CURA has fallen more than 49% from its highs in mid-February. This should be no mystery for those that are keeping score, as (in spite of positive revenue growth) estimated 2021 EPS are negative for the fourth year in a row.

An equally-weighted basket of the largest CRB Monitor Tier 2 companies had a -1.4% return for October, which outperformed the equally-weighted Tier 1 basket significantly. When these two portfolios deviate, it could be a signal for investors to rebalance into the Tier 1 basket (given the direct revenue relationship); with that said, we will be looking at the evolution of this spread in a future blog post.

The largest by market capitalization, and one of the best-performing Tier 2 CRBs, Innovative Industrial Properties, Inc. (NYSE: IIPR) rebounded in October, up more than 12% for the month and up 51% YTD. This should be no surprise, as IIPR’s revenue has been on a positive trajectory for several years and is expected to be up more than 70% in 2021. And as a REIT, IIPR is required by regulators to pay out at least 90% of their net earnings annually, and as a result 2021 dividends/shares have been declared at 29%.

Hydrofarm Holdings Group, Inc. (Nasdaq: HYFM), a broadly-diversified manufacturer and supplier of hydroponics products such as lighting equipment, climate control devices, and garden accessories, did not fare as well. HYFM closed out October down nearly 13% for the month and -44% YTD. Investors appear to continue their bearishness with regard to Hydrofarm, which expanded its operations in October with their $58 million acquisition of Innovative Growers Equipment. In the words of Bill Toler, Hydrofarm CEO, “IGE is a solid addition to our growing portfolio and will further solidify our position as the acquirer of choice in the CEA industry.” In spite of the negative performance, HYFM’s expected 2021 EPS are positive (+$0.70) for the first time in 3 years. With that said, the overall challenge of Tier 2 businesses is their high correlation to the performance of the Tier 1 CRB universe, and their ability to properly hedge that exposure will have a profound impact on their returns in the future.

The following is a sampling of highlights from the October 2021 cannabis news cycle, as tracked by CRB Monitor. Included are CRB Monitor’s proprietary Risk Tiers.