In 2021, CRB Monitor’s research team has made more than 1,000 updates to securities’ information and has added more than 3,000 news-related source documents to the CRB Monitor database. Here is a summary of the updates for November 2021: 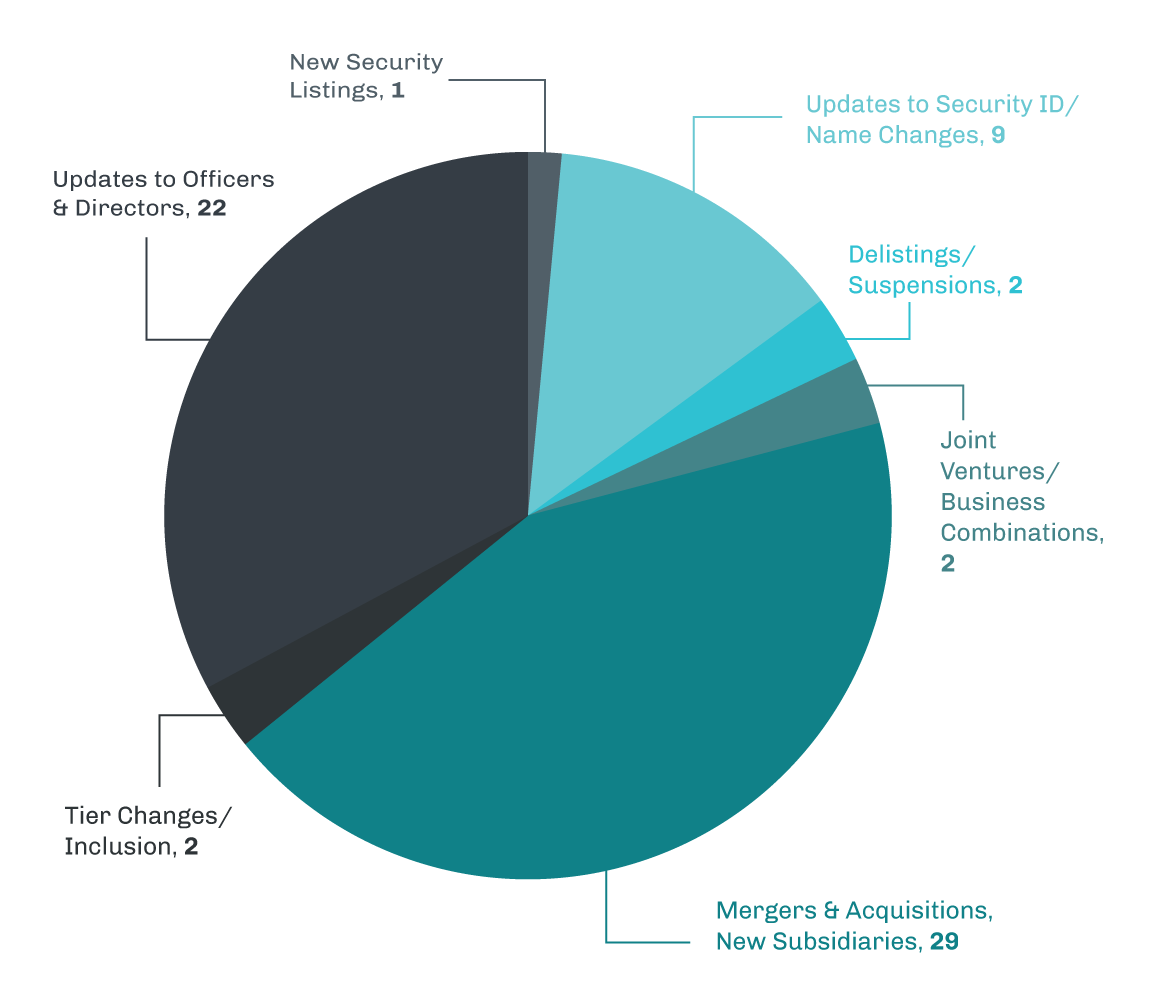 We continue our close watch on the cannabis news cycle, which never seems to take time off. CRB Monitor has been tracking several cannabis-linked mergers and acquisitions throughout 2021. Here are some of the November highlights:

The month of November began with the announcement on 11/1/21 that Tier 1B CRB The Green Organic Dutchman Holdings Ltd. (CSE: TGOD) would be acquiring, through share purchase, all of the issued and outstanding shares of Galaxie Brands Corporation, in a deal valued at approximately CAD 21mm. Galaxie Brands is an Ontario-based CRB that holds active Health Canada licenses for cultivation, retail, and manufacturing.

Also in the news was Tier 1B Verano Holdings Corp. (CSE: VRNO), which completed its purchase of Willow Brook Wellness, LLC, a Meriden, CT dispensary. In addition, Verano has entered into definitive agreements to acquire both Caring Nature, LLC, which holds an active dispensary in Waterbury, Connecticut, and Connecticut Pharmaceutical Solutions, Inc., which holds an operating cultivation and production facility. These purchases mark VRNO’s initial foray into the Connecticut cannabis market and expands their footprint to 18 states and 142 cannabis licenses that are in active or pending status.

According to a November 8th announcement, Tier 1B CRB The Valens Company Inc. (TSX: VLNS) completed its purchase of all the issued and outstanding shares of Citizen Stash Cannabis Corp. (formerly Experion Holdings Ltd.), a Health Canada licensed cultivator and processor of cannabis, based in Mission, BC. The acquisition of Citizen Stash, a Tier 1B business with one Tier 1A subsidiary, raises Valens’s active license total to eight including one CBD license in the US.

And finally, Tier 1B powerhouse MSO Columbia Care Inc. (CSE: CCHW) announced in November that it completed its acquisition of Medicine Man (aka Futurevision Ltd), a licensed Tier 1A Colorado operation. According to the press release, “This acquisition adds one cultivation facility and four dispensaries to Columbia Care’s Colorado operations, including the Medicine Man Longmont location, which is anticipated to close in Q1 2022. Columbia Care’s footprint in Colorado will now total 26 dispensaries and six cultivation and manufacturing facilities, including those under The Green Solution brand.” The Futurevision purchase brings CCHW’s active & pending license total, according to CRB Monitor Research, to 111 across 18 states.

The move toward legal cannabis continues in earnest, with an interesting development coming out of Europe and some updates at the federal and state levels.

Early in November, Ohio Senators filed legislation that, if passed, would revise the state’s medical marijuana system to allow access to cannabis if a physician “reasonably” believes their patient’s symptoms would be relieved or they would otherwise benefit from said cannabis. According to an article published in the Ohio Capital Journal, this legislation represents “a potentially massive expansion of eligibility for patients after years of piecemeal additions to the list of qualifying conditions.”

This proposal joins three other proposals in the state of Ohio that would legalize recreational cannabis – two in the legislature and one referendum proposal.

In Federal news, several Republican members of Congress introduced a bill in November that would federally legalize and tax marijuana. This bill represents an alternative to the current far-reaching Democratic-led proposals and the more narrow GOP cannabis descheduling legislation that has been circulating on Capitol Hill. The so-called States Reform Act, if passed and signed into law, would end federal marijuana prohibition while taking specific steps to ensure that businesses in existing state markets can continue to operate unencumbered by changing federal rules. Rep. Nancy Mace (R-SC) is the sponsor of this bill.

Among the various aspects of the bill are the following:

Also at the Federal level, a report was issued in early November by the Congressional Research Service (CRS) entitled “Does the President Have the Power to Legalize Marijuana?” What the report claims is that President is within his/her executive purview to compel agencies to reschedule marijuana, which is now classified as a Schedule I narcotic according to the Controlled Substances Act. In the words of the report, “Although the President cannot directly remove marijuana from control under federal controlled substances law, he might order executive agencies to consider either altering the scheduling of marijuana or changing their enforcement approach.”

The report goes on to explain that, while individual states have their own versions of the Controlled Substances Act, that they technically cannot legalize marijuana as that would supersede Federal law: “… states cannot actually legalize marijuana, because the states cannot change federal law and the Constitution’s Supremacy Clause dictates that federal law takes precedence over conflicting state laws. As long as marijuana is a Schedule I controlled substance under the CSA, all unauthorized activities involving marijuana are federal crimes anywhere in the United States, including in states that have purported to legalize medical or recreational marijuana.”

Finally, the report advances the argument that the President of the United States “could pursue the appointment of agency officials who favor de-scheduling, or use executive orders to direct DEA, HHS, and FDA to consider administrative de-scheduling of marijuana.” Given the recent history and going back to the campaign platform, it is questionable whether the Biden administration has any appetite for any executive action on cannabis reform, but as always, we’ll be watching for any new developments. 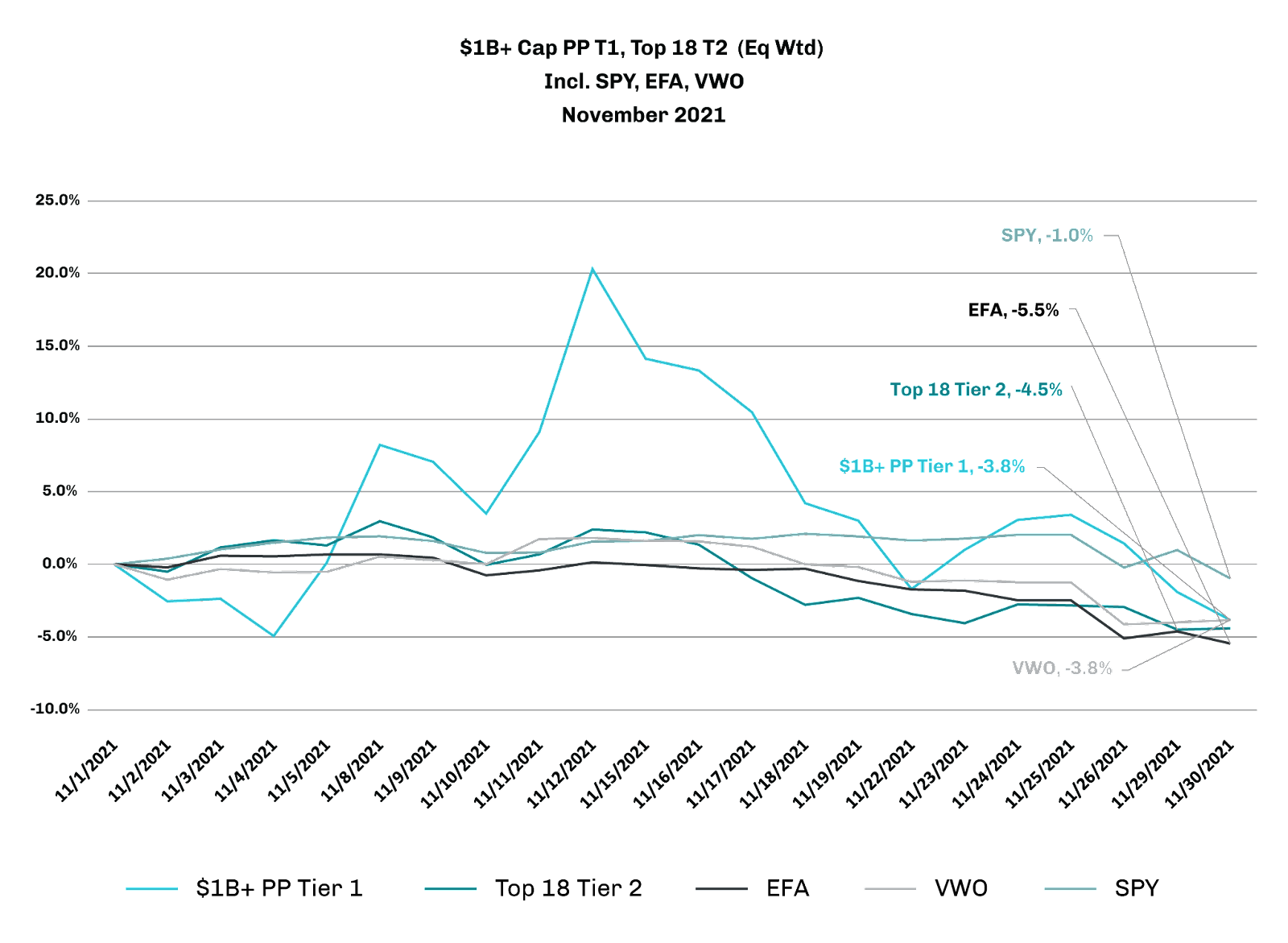 The CRB Monitor basket of the top 13 ($1b+ market cap) pure play Tier 1 CRBs, equally-weighted, fell by 3.8% in November 2021, which was largely consistent with the performance of global equities for the month. An equally-weighted basket of the top 17 Tier 2 CRB’s was down by 4.4%. Looking at the chart above, broad equity indexes (S&P 500, MSCI EAFE, Emerging Markets) were also lower, with the S&P 500 outperforming the rest at -1.0%.

Cannabis equities experienced a rebound in the first half of November, with several stocks peaking on the 15th before crashing back down to earth by the end of the month and ending in negative territory.

Currently, Ayr Wellness Inc. (CSE: AYR.A)’s 31 direct and indirect subsidiaries operate in nine states and hold 69 cannabis licenses that are in either active or pending-approval status. Ayr, a vertically-integrated, US multi-state operator, took a veritable nosedive in November, falling by 23% as investors lined up to sell AYR shares starting at mid-month. This negative performance was a bit of a curiosity given that Ayr has been expanding operations into several states over the last two quarters; then Ayr’s 3rd Quarter results reported on November 22nd revealed a second consecutive period of operating losses and negative EBITDA growth.

Perhaps one of the biggest disappointments of 2021 has been Canopy Growth Corporation (TSX: WEED), having lost another 16% in November and down a stunning 58.9% YTD. WEED’s market capitalization has fallen to $5.4 billion from $12.8 billion at the start of 2021. What has happened to the company that was dubbed by some (including former CEO Bruce Linton) to be the “Google” of Weed” just a few years ago? According to a November article in The Motley Fool, Canopy Growth is losing market share to competitors that are largely US cannabis operators: “The loss in market share by Canopy came from a 13% decline in revenue for the quarter on a year-over-year comparison. The reduction in revenue led to an adjusted EBITDA loss that doubled the loss of last year's FY Q2, driven by lower sales and a negative 54% gross margin.” Meanwhile, many of the US single-state and multi-state operators are posting better results, likely due to an increase in the number of states that have legalized recreational cannabis, which is now sitting at 18 plus the District of Columbia. With that said, Canopy is still a powerhouse in the Canadian cannabis space with their subsidiaries holding more than 300 cannabis licenses in either active or pending status.

One ray of sunshine in November was Cresco Labs Inc. (CSE: CL), a Tier 1B multi-state operator which now holds over 100 cannabis licenses across 11 states in the US. One of the only CRB’s in positive territory, CL stock had +5.8% return for the month, as it announced its expansion of operations in Illinois and Pennsylvania. In spite of CL’s difficult (-21%) YTD performance, the company is still considered one of the best suited for the near term. In a November article in Yahoo Finance, Cantor Fitzgerald’s analyst Pablo Zuanic maintained its rating of “Overweight”, called it a “top pick” and raised its price target from $12 to $15. During this time of weakness in the industry, it will be interesting to see if Cresco “climbs the ladder,” given that it’s now in 7th position in the largest CRBs by market capitalization.

Another positive story this month was the performance of Tier 1B TerrAscend Corp. (CSE: TER), a Canadian-based cultivator/manufacturer/retailer with 55 active or pending-approval licenses across seven states in the US and three additional licenses in Ontario, Canada. TER’s stock was up an impressive 12% for the month, in spite of a less-than-stellar Q3 earnings report. TerrAscend reported net losses of $14.6 million and negative YoY EBITDA growth; however, investors were bullish, perhaps motivated by the court’s and shareholders’ approval of TER’s acquisition of Gage Growth Corp. (CSE: GAGE) in mid-November.

An equally-weighted basket of the largest CRB Monitor Tier 2 companies had a -4.4% return for November, which was in line with the performance of the equally-weighted Tier 1 basket. When these two portfolios deviate, it could be a signal for investors to rebalance into (or out of) the Tier 1 basket (given the direct revenue relationship).

Given its large market cap amongst Tier 2 CRBs, investors pay close attention to the activities of Innovative Industrial Properties, Inc. (NYSE: IIPR), an internally-managed real estate investment trust ("REIT") focused on the acquisition, ownership and management of specialized properties leased to experienced, state-licensed operators for their regulated state-licensed cannabis facilities. While IIPR is not considered plant-touching, its revenues can be tied to the success of their broad portfolio of properties, which reads like a “who’s who” of North American CRBs (e.g. Curaleaf, Medicine Man, Columbia Care, Cresco Labs). IIPR’s earnings, 90% of which must be paid out to shareholders, have been stable and have grown steadily as new properties are acquired and leased. As such, IIPR’s YTD performance (+40%) in 2021 has been spectacular for the cannabis space and analysts have continually rated IIPR a screaming buy, largely for its stable dividends and steady cash flow in spite of the volatile space it plays in.

From the small cap end of the spectrum, Ignite International Brands, Ltd. (CSE: BILZ)’s share price took off following the news of the company’s October sales, which exceeded Q3 numbers significantly. A player in the CBD space, particularly through the manufacture and sale of vaping devices, BILZ’s stock returned 19.5% for the month and in the words of CEO Dan Bilzerian, “Ignite’s third quarter sales were the highest in the history of the company, which was yet another quarter of record sales. We are now pleased to report that sales in the month of October alone have exceeded all of Q3 sales. I am confident that, based on October sales and recently secured contracts, fourth-quarter sales will exceed the sales for all three prior quarters combined.”

The Alkaline Water Company Inc. (NAS: WTER), a manufacturer of CBD-infused mineral water as well as a number of hemp-derived topicals and ingestibles, struggled in the month of November, down 28%. This appeared to be largely profit-taking by investors, given that on November 9th WTER reported a 50% increase in YoY revenue. WTER shares peaked in August at $2.30 (up 109% YTD) before coming back to earth in subsequent months, closing at $1.30 on 11/30/21.

The following is a sampling of highlights from the November 2021 cannabis news cycle, as tracked by CRB Monitor. Included are CRB Monitor’s proprietary Risk Tiers.