Biden’s Cannabis-related Pardons: What does it mean for Cannabis Equities?

To say that cannabis equities have struggled over the last 18-20 months would be an understatement of epic proportions. And for investors that have earnestly held onto their cannabis equity shares, the collapse has been nothing short of catastrophic, with many CRBs losing 80% or more of their value over that time. Consolidation across the industry has been a common threat as many cannabis-related small caps have become micro caps and several cannabis-themed ETFs have shrunk to a fraction of their peak asset size.

It is true that global markets have also struggled during this time, the negativity of their returns is nowhere close to the precipitous drop in cannabis equities (see below). We highlight three of the largest cannabis-themed ETFs and their performance along with that of three global index ETFs. The Nasdaq CRB Monitor Global Cannabis Index (HERBAL), which had its launch until on 11/9/2021, has faced a similar fate, down 71% since its inception. 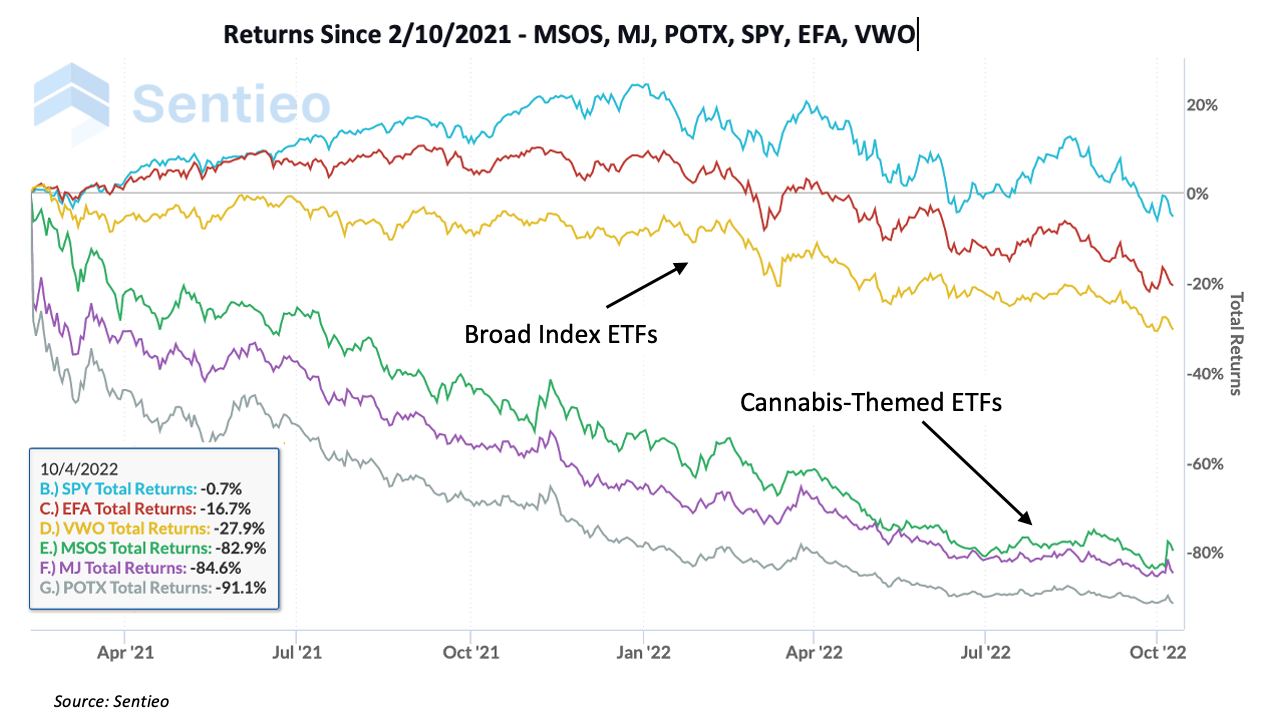 A significant component of these losses can be attributed to, among other factors, the slow, seemingly endless crawl toward US marijuana legalization. We keep seeing the same movie over and over again: analysts’ and investors’ hypersensitivity to new developments out of Washington eventually turn to numbness, as one bill after another either dies in committee or passes in one house only to fail to make it to the floor of the other. This seems to happen year after year.

What is astounding, however, is that the legalization and decriminalization of cannabis is overwhelmingly popular across the in the United States in spite of the gridlock on Capitol Hill. In both red and blue states, cannabis polls extremely well and why not? Proponents of cannabis usage will cite numerous advantages over recreational alcohol, not to mention the research that is ongoing into the myriad medical uses as well. Given all this popularity, it is surprising that politicians haven’t capitulated by now and made marijuana fully legal, at least for medical use.

We witnessed the entire universe of individuals and institutions that have an interest in the cannabis ecosystem celebrate last week as President Joe Biden announced his intention to pardon thousands of people who have been convicted by the federal government of marijuana possession. This decision by the administration not only will change the lives of thousands of Americans and their families but will also open the door to further reforms, which many feel are long overdue.

Do these pardons have anything to do with legalization?

Not at the moment, but Biden’s statement made two additional appeals, both of which would have far-reaching consequences, and their impact on several aspects of society cannot be understated.

First, he is asking governors to emulate his actions and pardon (or vacate the sentences of) those who have been convicted of cannabis-related offenses at the state level. In the words of the President, “Just as no one should be in a Federal prison solely due to the possession of marijuana, no one should be in a local jail or state prison for that reason, either.”

If governors follow through on this appeal, state-level pardons would have an immediate impact on potentially millions of individuals either serving time in state penitentiaries or carrying felony convictions outside of the prison system.

Second, Biden is “asking the Secretary of Health and Human Services and the Attorney General to initiate the administrative process to review expeditiously how marijuana is scheduled under federal law. Federal law currently classifies marijuana in Schedule I of the Controlled Substances Act, the classification meant for the most dangerous substances.”

With regard to the US Drug Enforcement Administration’s Schedule 1 List, we have written on several occasions about the gravity of including marijuana on a list with narcotics like heroin, PCP, lysergic acid diethylamide (LSD), MDMA, and peyote, to name a few. (It is all too clear that “one of these things is not like the others”.)

Now that cannabis usage has made it into the mainstream in many states in the US (36 have legalized medical, 19 of those have legalized recreational) - not to mention that Canada legalized Marijuana on October 17, 2018), it is obviously out of place on the Schedule 1 list. And this is considered by many to be an injustice, given that US law defines Schedule 1 narcotics as “having no medical purpose”. And as such the cultivation, manufacturing, wholesale, retail, and transportation of marijuana is unambiguously illegal in the eyes of the federal government, regardless of legalization at the state level. And to echo the President’s sentiments, the consequences of including THC on this list are far-reaching and have had a disproportionate impact on lower income communities and people of color.

Sounds great, but does this help to boost cannabis equities?

n short, yes, but there are several steps that must be taken in order for cannabis investors to see the light of day again. Let’s face it, 80% is a big number.

With that said, in a recent blog post on CRB Monitor we write that from a strategic perspective there is no better time than the present to buy CRBs, with one caveat: that investors need to be patient, above all else. We continue to stand behind this statement, and this ray of hope out of Washington should provide just the optimism that was needed to motivate investors to keep the faith.

Without adding too much detail to this quick read, here are a handful of possible next steps now that the President has started the ball rolling down the hill (in no particular order):

The fact of the matter is that with CRBs at their current prices we are hard-pressed to find a company that isn’t trading at a historically low level. And rather attempt to pick the winners of tomorrow, risk-averse investors should find a cannabis-themed ETF (or better yet the HERBAL Index!) that suits them from a diversification and risk perspective, and patiently hold that exposure with an eye toward legalization, whenever that might happen.